Land of The Cheese!

Saas Fee, Switzerland- The last time I was in this town, was 6 years ago and I was 15 years old. I was traveling with a new team and I wasn't sure of my place on that team at all. Now, 6 years later, I am back again, but in much different circumstances... including the receding glacier.

When Maddy and I arrived in Zurich, we were very tired and thought that the other girls were arriving much later than us. We decided to take a little nap on a bench near a man with an eye patch and a piece of paper in his mouth. We were woken up by Tim standing in front of us, looking confused saying, "Girls?" I guess we were wrong about the other flight and they had been waiting for us... I blame jet lag.
We then jumped in the car and drove 3.5 hours to Saas Fee, jumping on a car train along the way. The thing that sets this town apart from many other towns is that is entirely car free, other than electric cars. Thus, we walked our bags to our rooms, made ourselves at home and tried not to fall asleep... I blame jet lag. 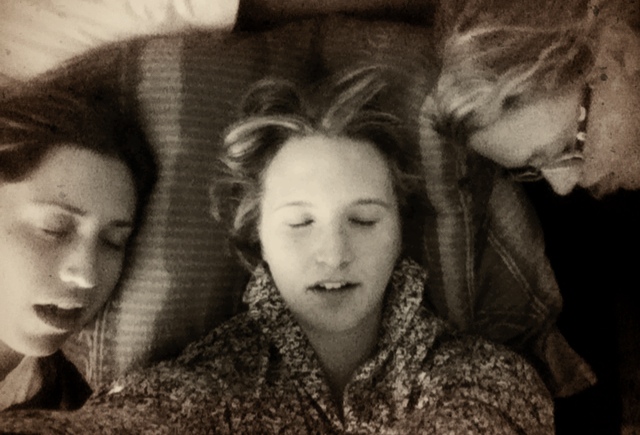 The next morning we woke up to ski and realized that the glacier was closed because of the bad weather. It was foggy, pouring rain and very unpleasant. What do ski racers do when the ski hill is closed?
Create a ghetto gym! 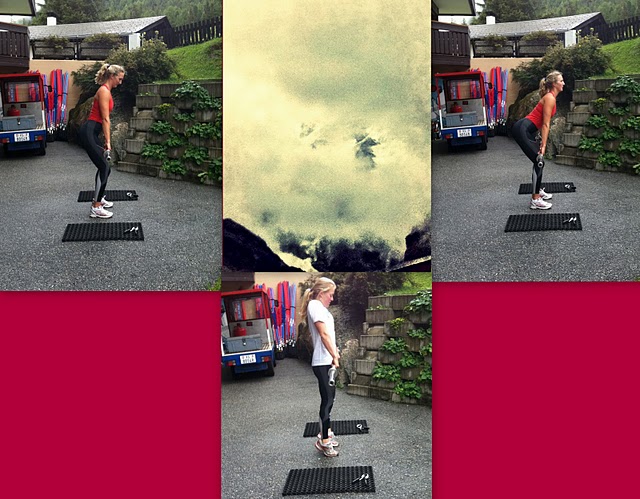 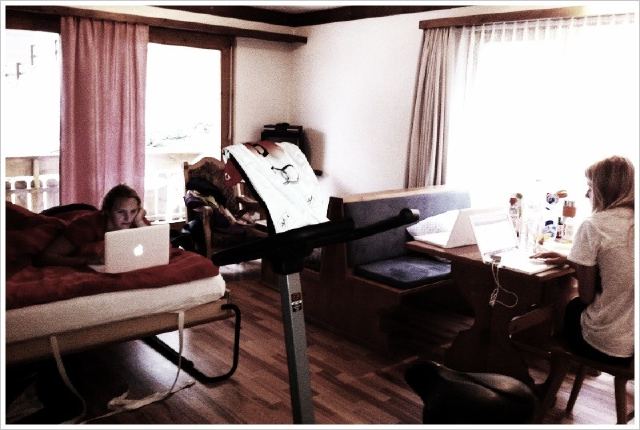 We woke up the next day, started heading up the gondolas and realized that we were not going to get above the fog. We free skied for a few hours "feeling out our equipment and seeing where we were", but I will honestly say that I didn't see a whole lot.
The t-bar broke down, so we naturally had an impromptu photo shoot...
Levetating! 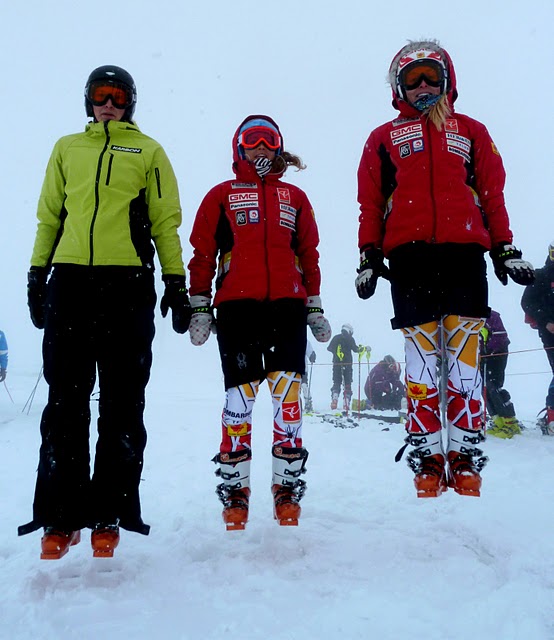 But after a tough day on the hill, Hugues (our head coach) made us Fondu for dinner! 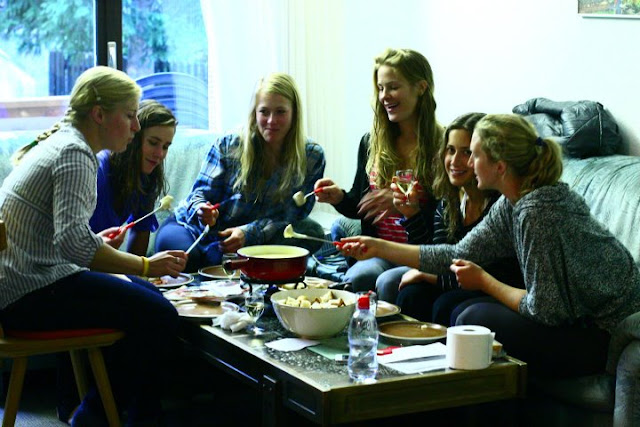 TODAY- We woke up and it was absolutely beautiful outside. We were no longer cold to the bone and scrunching up our faces, squinting our eyes and whimpering because we couldn't see anything. 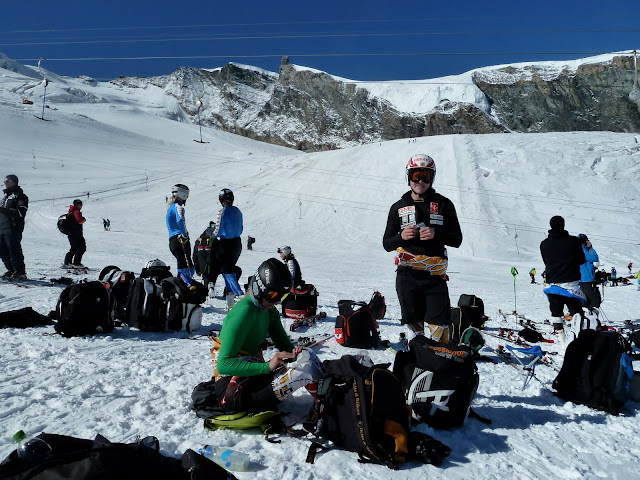 We dropped our bags in the communal "bag area" and headed up to the courses...
Which one is even mine? A common question I asked myself throughout the day. 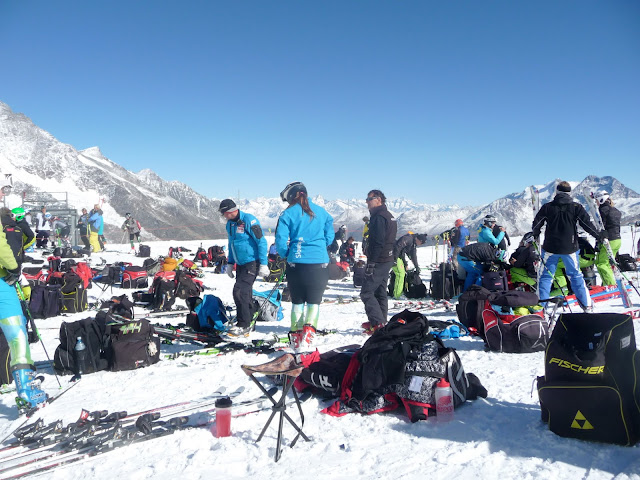 It is always tough to get used to everything you have to pay attention to on a glacier.
1) Many courses... 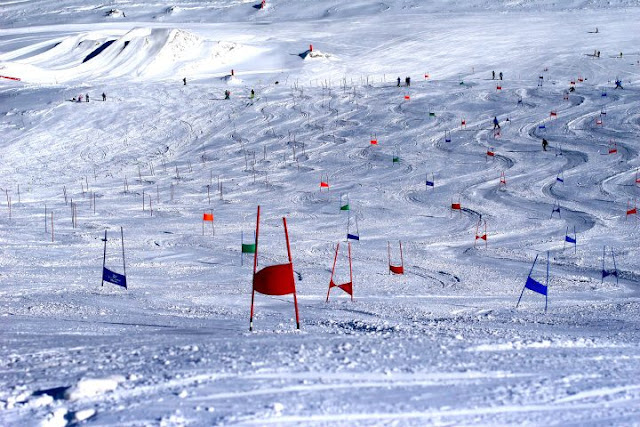 2) Crevices- Stay on the trails! 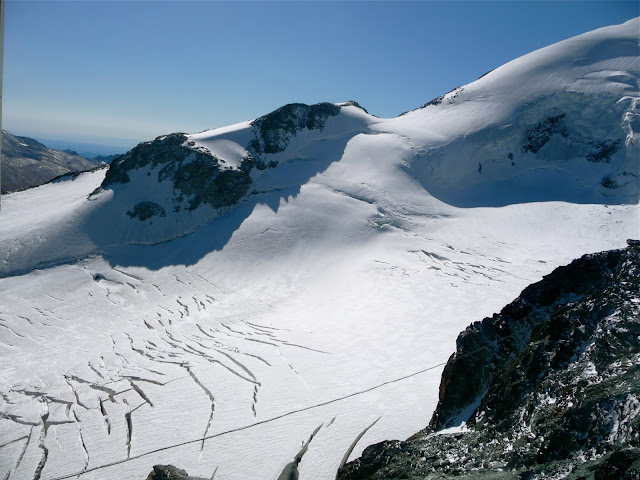 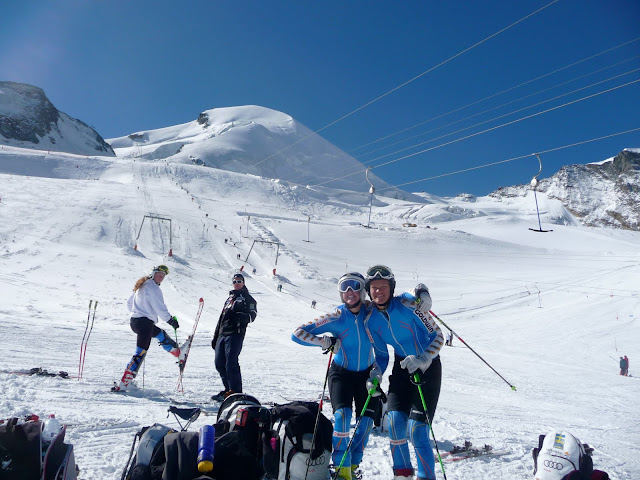 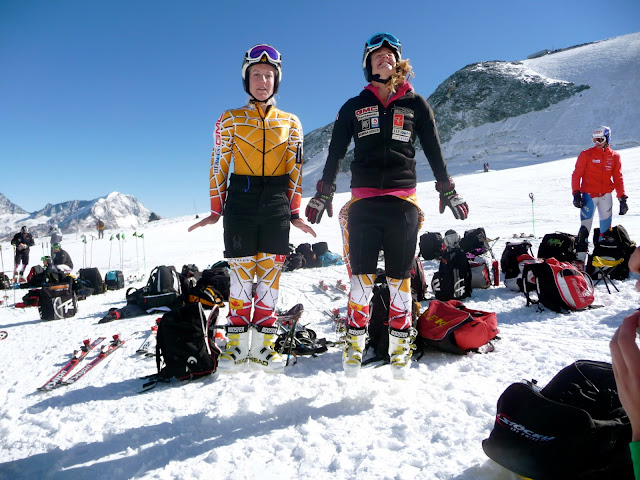 We finished our runs and got ready to head down for the day. 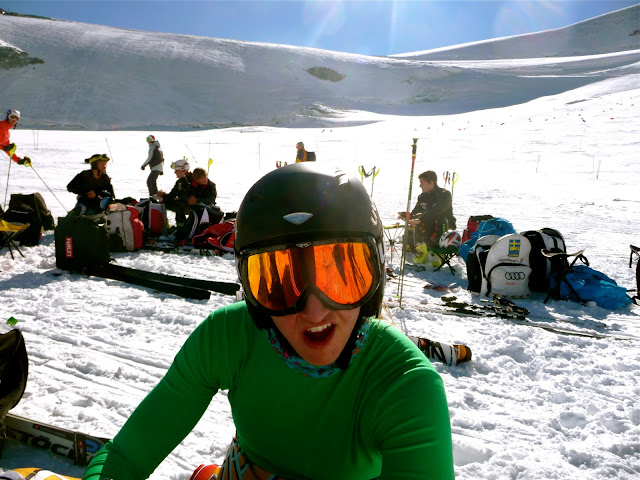 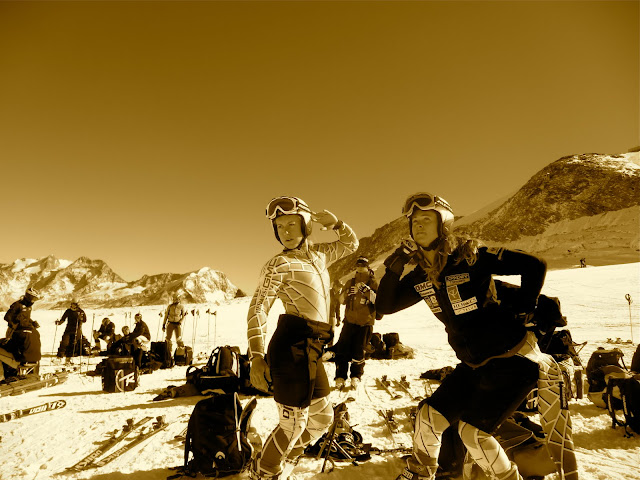 I decided that I should take a few pictures of the landscape early in the trip before the fatigue sets in later on. 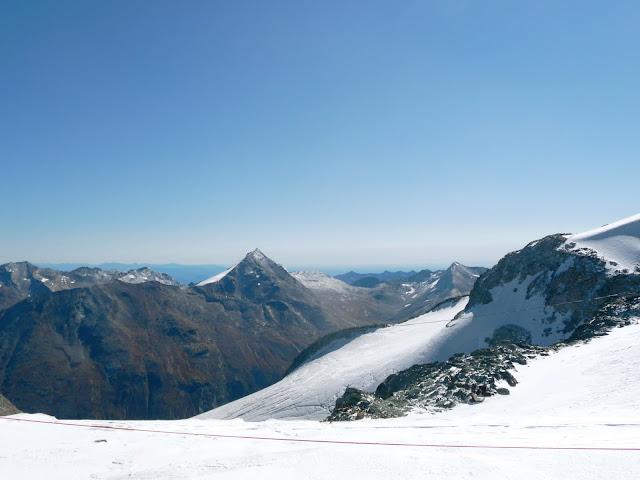 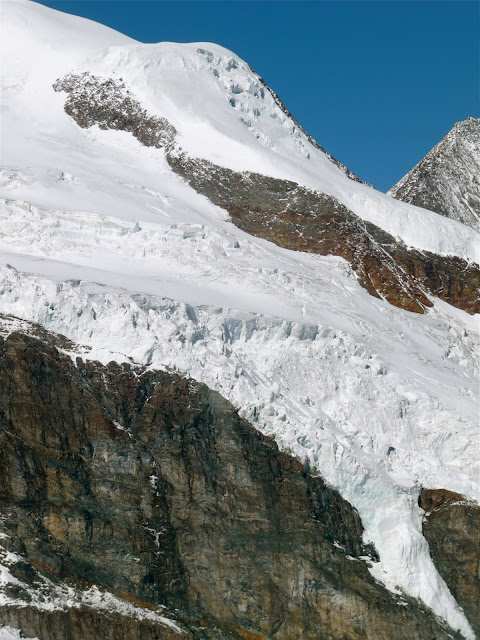 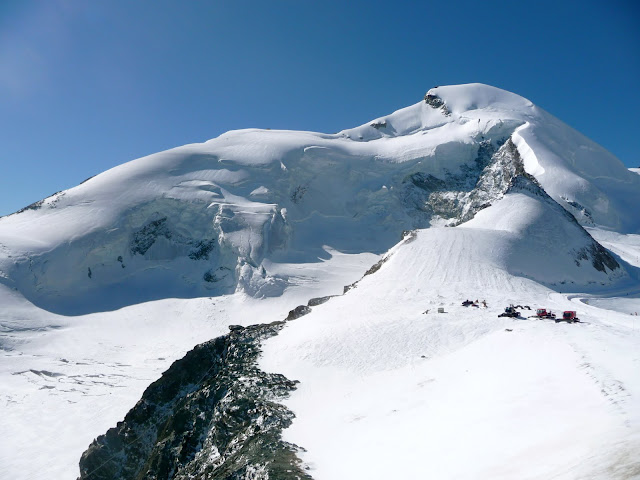 After skiing we quickly had a nap and then hurried outside for a hike and some volleyball for dryland. 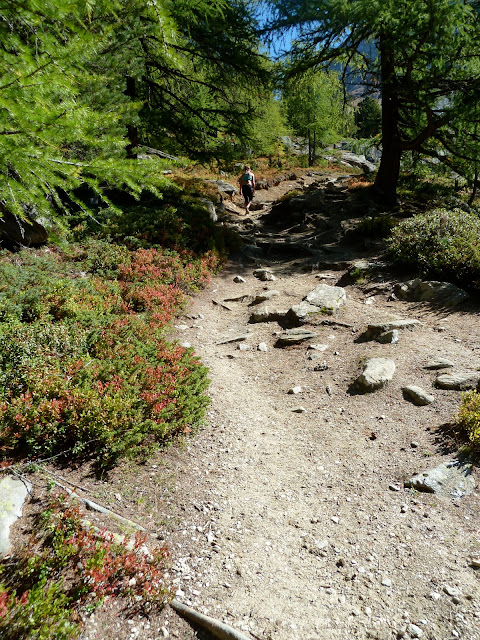 We had to hit a certain heart rate, so we were all hiking at our own pace. I was by myself at one point, starting to feel my breathing, my heart rate and the time, when I realized that the ground looked sparkly. Some of the rocks, which had crystals in them, must have broken down over time creating this shiny path. As I was putting one foot in front of the other I tried to come up with as many words for what I was seeing as I could: sparkling, shimmering, shining, shattered mirrors reflecting the sun lighting up the world around us... Apparently I got carried away, but it did pass the time when I was breathing heavily! 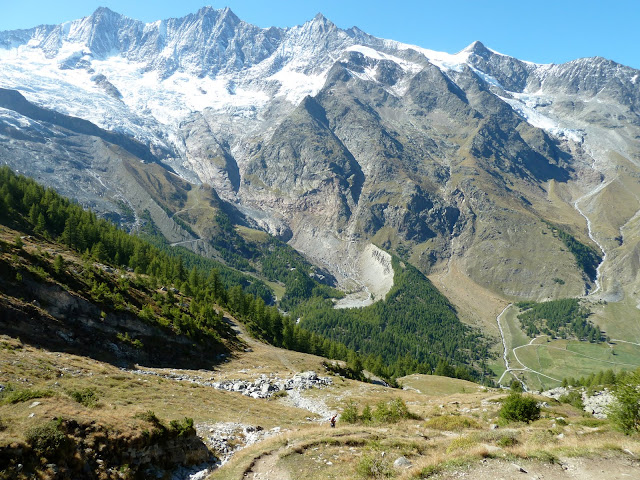 When we reached our destination, we took a few pictures 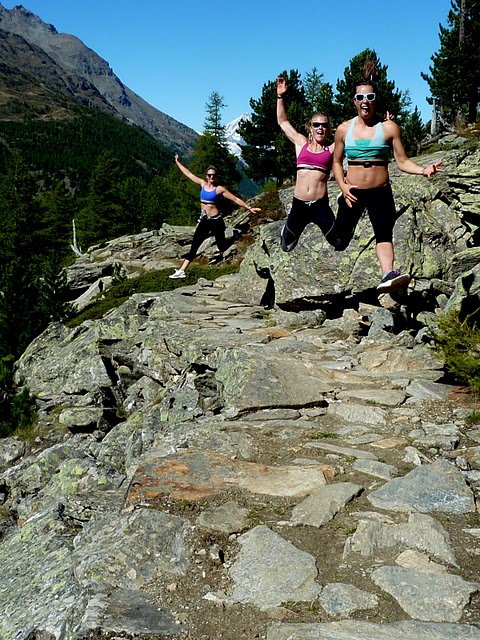 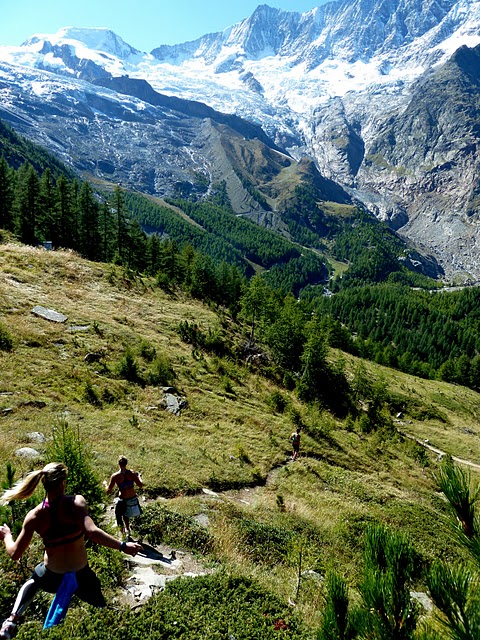 for our volleyball game! (I'm telling Maddy what play to make) 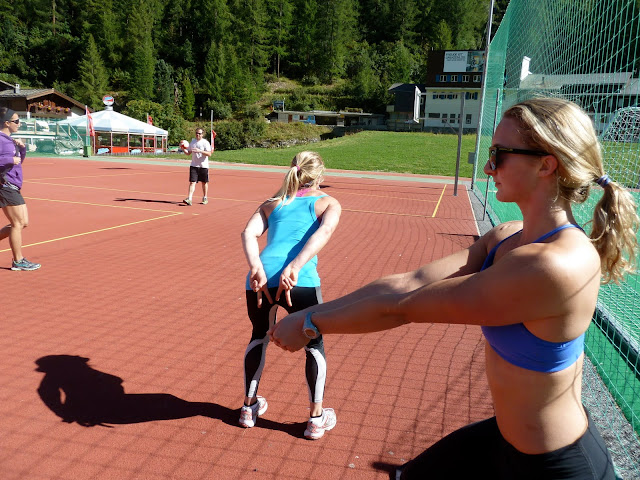 We finished up our day with a little bit of slack lining, with the river roaring below us and the mountains towering above. 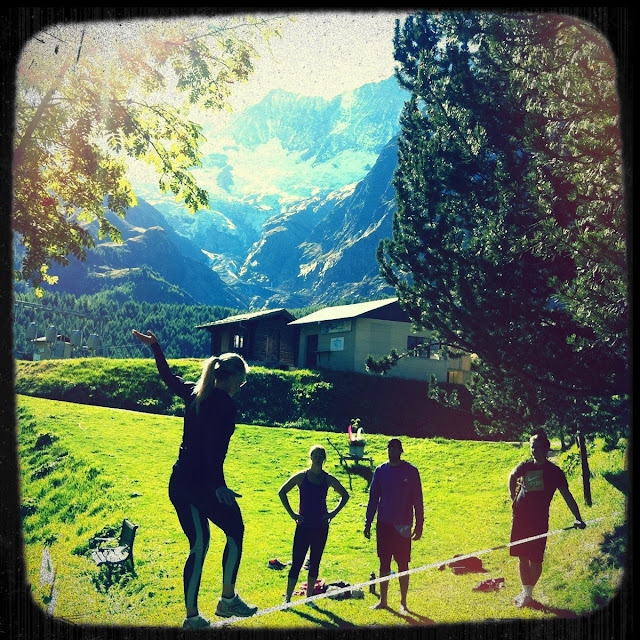 Maddy nicely ended the day saying: "I was giving a dog kisses.... then it threw up." Classic!

(Thanks to Steph Rizzo, Mitch, Maddy and Anna for some of their pictures!)
Email Post