I arrived in Calgary fairly early and some of the girls and I decided to get dinner and watch the Social Network. We had to time our dinner properly because we weren't allowed to eat the next morning.... blood testing.
The next morning we woke up, packed our breakfast and headed to The University of Calgary for testing. I don't function very well without food in the morning and put coffee in my oatmeal, bad move. Our first test was a blood test and after that we were allowed to eat. And by eat I naturally mean, practice what I learned from Kev... scarf down my food. 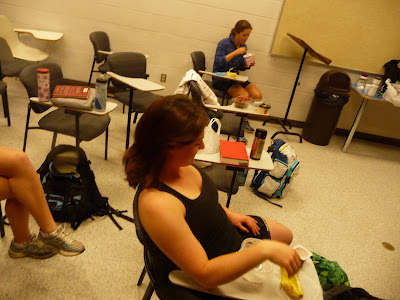 After eating some food we entered another lab room for our Anthro testing. This consists of a weigh in, measurements and multiple pinches. In the end, we are told our fat to muscle ratio... thus if we got stronger (body composition). 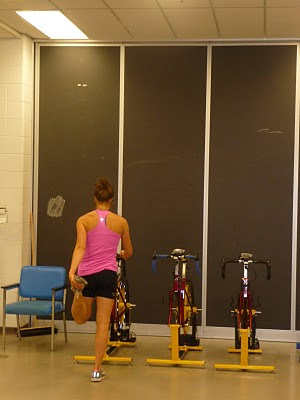 Mitch warming up for her bike test.

We had some time to digest before our first bike test, the incremental lactate test. To sum this up, it is pretty much go until you can't go any longer... =death 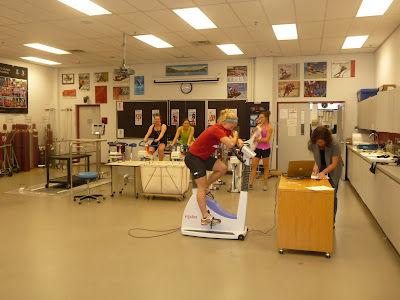 After this, we have a test that tests the strength of our quads compared to our hamstrings.
We picked up some lunch and rested up for our final test, where we have to bike at a set wattage for as long as we can. This might be the worst test of all... or as Kelly liked to yell after I was done... "It's a boy!!" 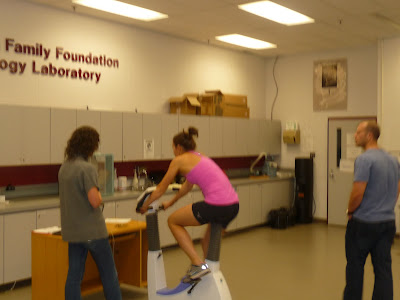 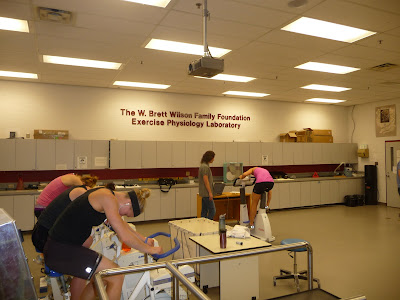 And done!
(Ps.. See the writing on the wall, I have tried to distract myself by making words with the letters there. A trick from Kate Ryley... But I don't focus well when my heart-rate is high... or when I haven't eaten, apparently, so this technique, along with many, failed.)

Our day of testing was done after this. We finished the day up with a talk by Kristina Groves and physio.

The next day we were allowed to eat breakfast, so hot water went into my oatmeal thankfully. In the morning, we did some jumping, power and agility tests, then our testing was over. For another 6 months or so... not that we're counting. We met about our results and headed to the airport to fly to Europe to start the season. Harder, better, faster, stronger???