I'm sorry that this is so late! I'll tell you the story/excuse of why I am a bad blogger, this time. - From the end to the beginning.
After the races were over in Russia we had to be downstairs ready to go at 2:40am the next morning for a 6:10am flight. I thought that this wake-up was bad, but things seemed to get harder from here. When we arrived at the airport, we discovered that we had to carry all of the bags over to the main entrance doors to the building, no carts included! Once we got to the doors we had to put each and every bag through an x-ray. I failed to mention that we had about 26 bags. From the x-rays we shuttled the bags upstairs and over to the check in. The check in counter was a disaster, people here, people there, bags everywhere! However, we ended up making the flight and it looked like it would leave on time. I fell asleep right away.
When I woke up again we were on the ground, but not in Moscow, we were still in Sochi. I had been sleeping for an hour and a half, my next layover was only 2 hours. When we finally did arrive in Moscow, I ran like a blind mouse towards my gate, distantly hearing them saying that boarding was now closed. I sprinted up to the desk just in time and gave them my boarding pass, while wheezing all the time.
I barely made my next flight from Paris to Montreal... and yes you guessed it. My bags did not make any of those last two flights. Now I am waiting... and waiting... and calling... and smelling, like I flower I mean.
Therefore, I am a bad blogger. I have been waiting for my card reader which is in my missing baggage, but after days without it, I will blog from my iphone's perspective!

So here we go!
When we arrived in Russia, Jenny and I decided to go up one of the gondolas to take a look at our surroundings. Everything is quite different in Russia, including the lack of coniferous trees! From this view you can barely see the finish line for the Olympics!
You have to go up two more long gondolas to get to the top of the mountain! 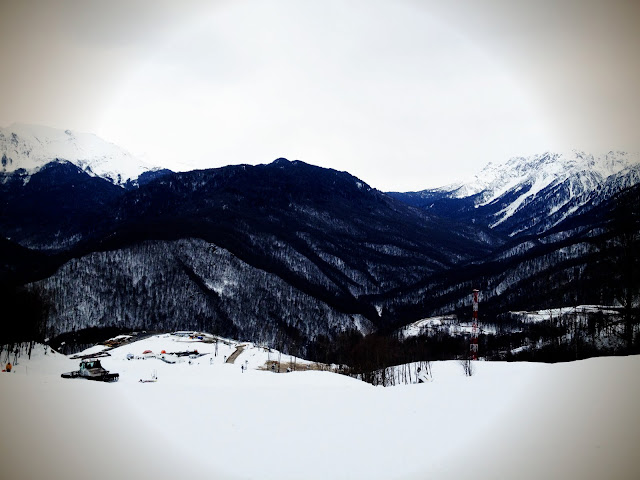 It is incredible the work that they have done in the past few years. Before... there was hardly anything in this little valley. Our hotel only opened 2 weeks before the races. 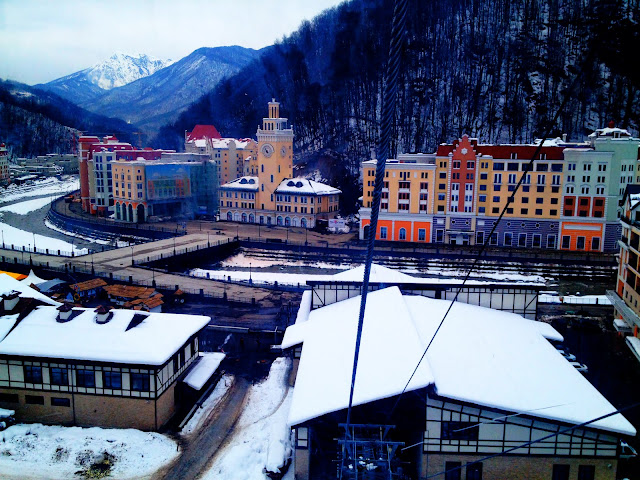 This is basically the only stretch along the river that is complete, everything else is under construction and is recognized by the "vivid" colour of cement. 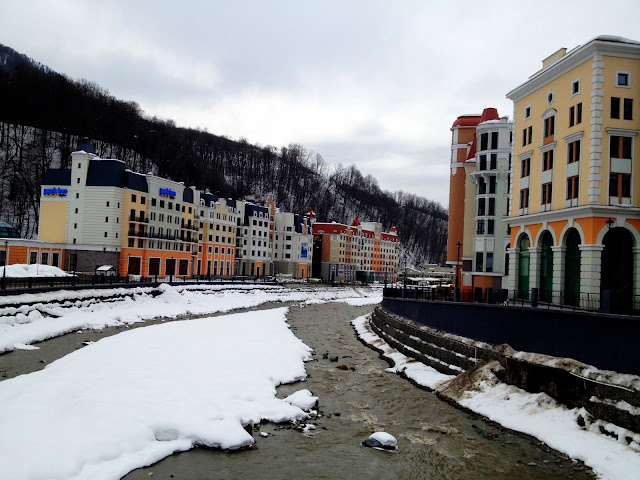 This means Rosa Khutor in Russia! Rosa Khutor is the name of the valley for the many of the events during the Olympics; including sliding, cross country, ski jumping, snow boarding, alpine skiing, etc.

Originally when I decided to go to Russia I was only supposed to race in the super combined so that I would get to ski on the Olympic hills. However, when I arrived in Sochi I decided to inspect the downhill and later... ski the training runs! 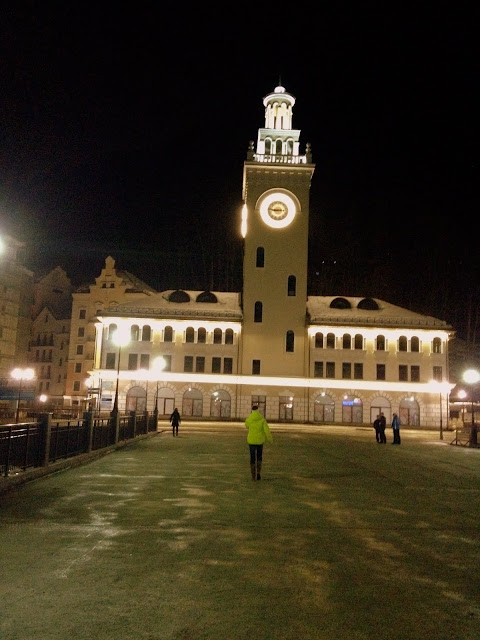 The first day of downhill really took it out of me. I stood in the start with bib 69 on (yes, I was last) and I felt good. I was relaxed, didn't have any pressure and knew the course. However, when I pushed out of the gate and made my first turn, I immediately switched emotions. With my skis bumping under me, my eyes bulging out of my head and my boots feeling like they would fall off, I headed down the hill. I guess I didn't take into consideration how bumpy the course would be after 72 (including forerunners) other people skied down it. Also, speed feels much bumpier than tech to begin with. I got bounced around a lot, missed a gate and felt my mind wondering how I was going to pull this one off. Earlier that day they had decided that we had to stand up before the jumps because the jumps were quite big and it was windy, so they wanted us to be safe. Yet, for me this small amount of time out of my tuck was enough to help me get my bearings! I soared over the jump and finally felt good!
The second training day was canceled due to too much snow.
On the third training day, I headed up to the top, with plans of inspecting the dh, training some slalom and then deciding if I would run the downhill. At times, I am not very good with backing off when it comes to skiing, so after inspection, my decision was made. I came into that final training run, feeling some fight come back into me. I expected the bumps, knew where they were and knew that it was up to my skiing to pull me through! I wasn't fast, but I conquered my first real downhill in a few years!

After all of that mental stress and brain rattling, we were invited to a welcome party in the other hotel (there are two at the moment).
After some amazing food and three tiramisus, we experienced some Russian culture! 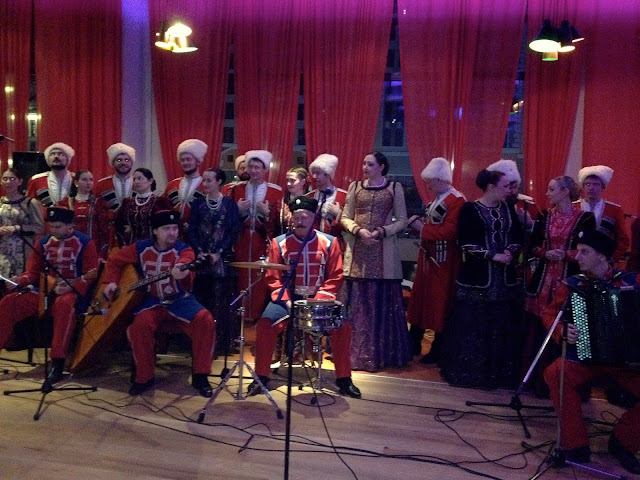 This group sang us the Olympic song, keeping us entertained because we never knew what would come next; dancing, loud singing, yipping... who knows!

It was nice to finally see some Russian culture and get into the spirit of the next Olympics! 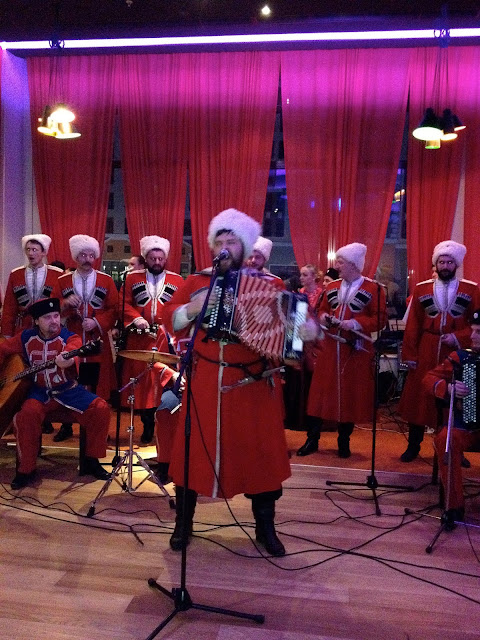 I will update you on the rest of my adventure when I can upload the rest of my pictures!
I am now safely in Burlington enjoying some time off. I feel a little bit guilty as I lazily sit around reading my book, drinking tea and shopping, but it is what my soul needs. 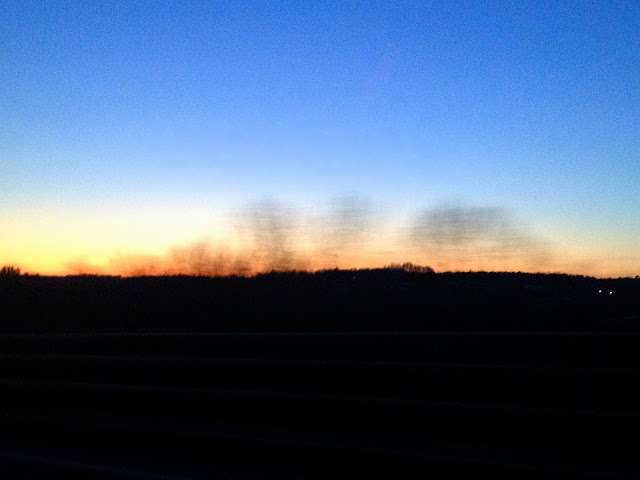 Now I will leave you with this to melt your hearts as this day continues. Our puppy has now been named: Boulder!! Right now she looks more like a small pebble, but in 80 pounds, the name will stick as we walk down the road, call boulder and our 100pound puppy will sprint out of the woods. I haven't met her, but I love her already. Today I heard her bark while on the phone with my mom! 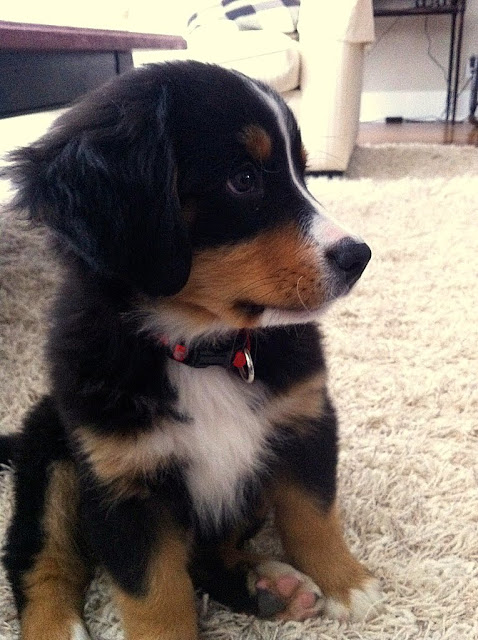 I should check on my bags again, so... until next time!
Email Post