This Thursday we flew to Barcelona, eventually making our way to Soldeu, Andorra!
Barcelona is absolutely beautiful. (Sorry about the iphone pictures through the window...) 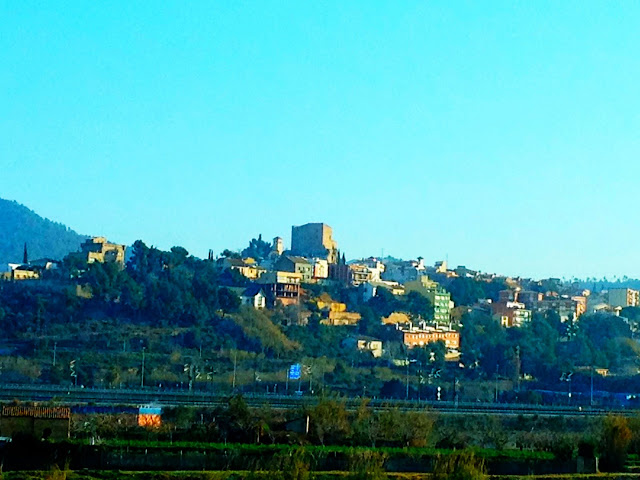 On the 3 hour drive to Andorra we saw some beautiful sights! I should have slept, but couldn't take my eyes off of the windows, especially once I got car sick. \ 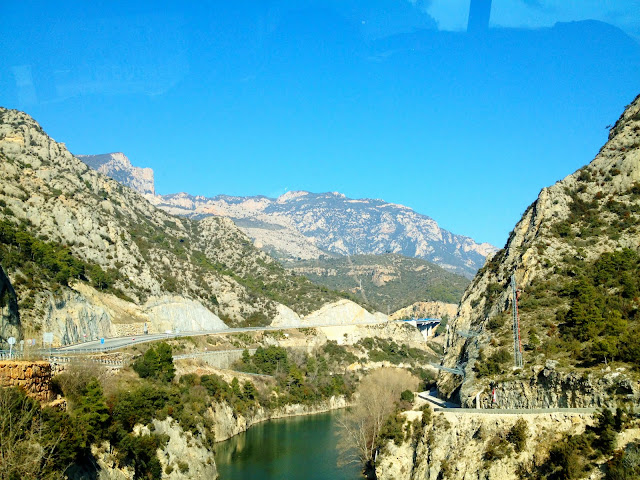 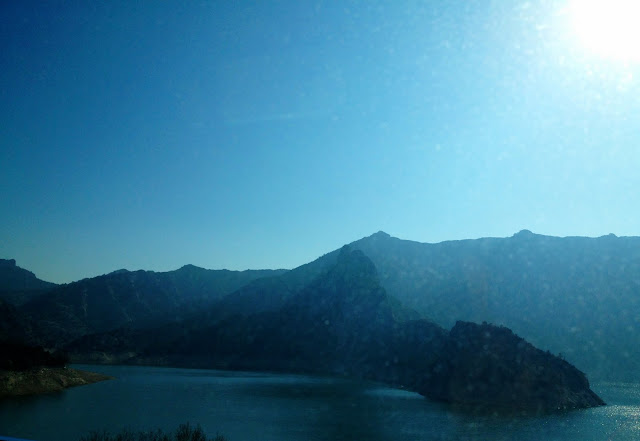 We arrived in Soldeu and were in for a pleasant surprise. It is absolutely beautiful here! And the hill is steep and perfect. 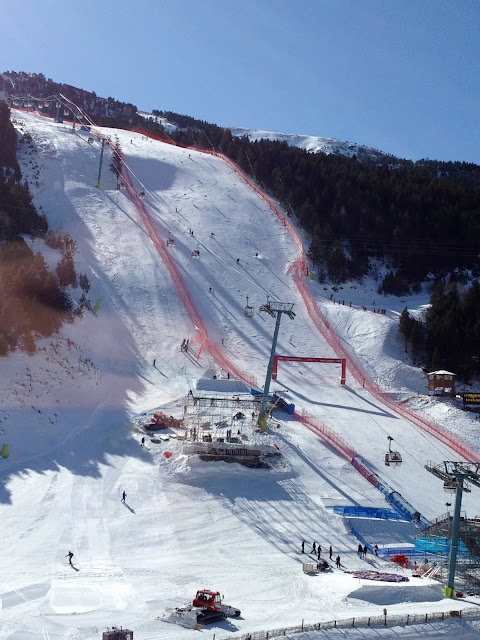 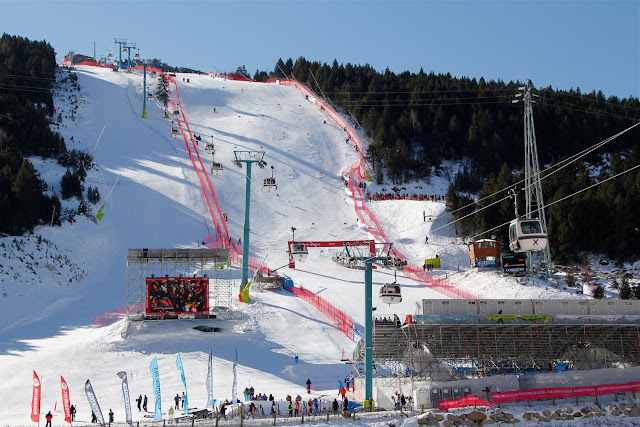 The schedule for the weekend was supposed to be GS on Friday and Saturday and SL on Sunday. However, when Anna and I strolled downstairs after our sleep in on Friday, we found out that the winds had been 160km/h overnight. Everything blew away; the tv towers, the signs, the blow up Milka tent. The race was delayed for two hours to fix the damage.
Mp took advantage of the delay to sign a few autographs during breakfast. 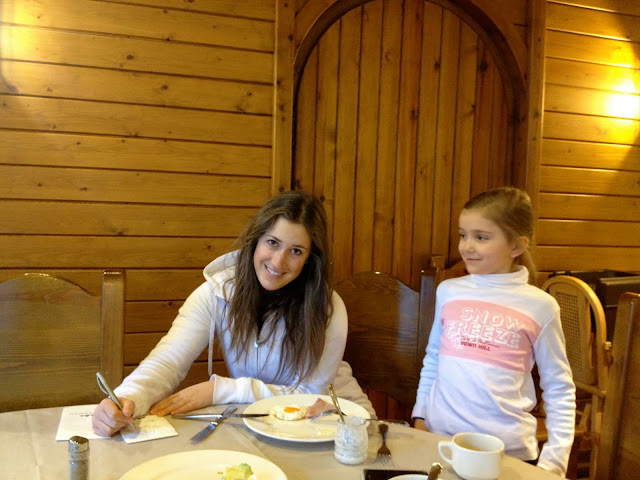 Anna and I ventured up to watch the race.
This is a cool viewing area, and a little warmer I bet! 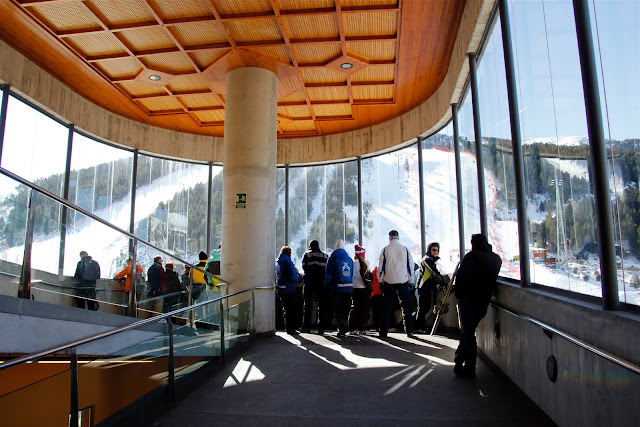 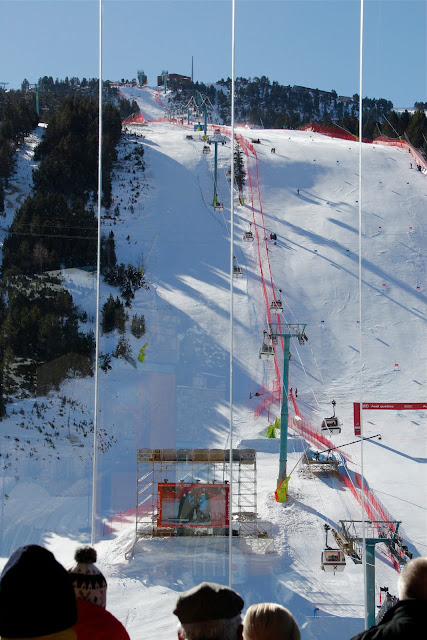 Looking back at the town. 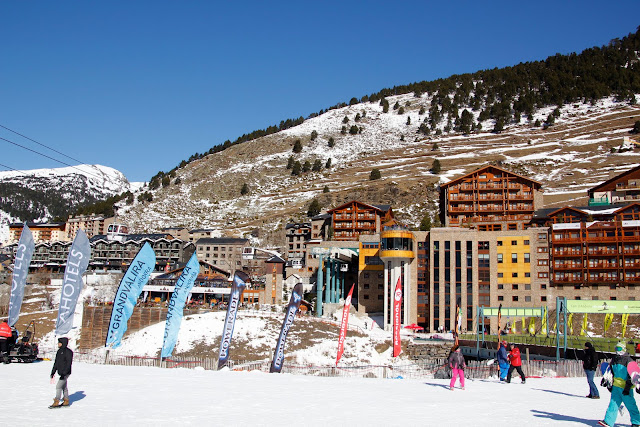 My Mom wanted to name our new dog Rossi... I guess our family loves Rossignol more than some. 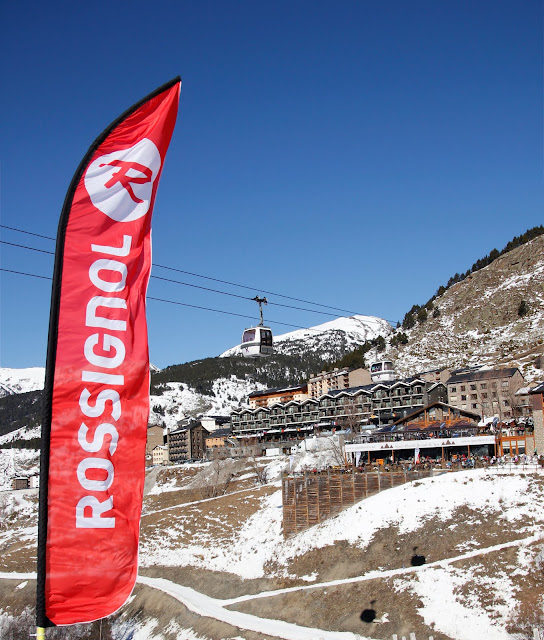 Yet, it was delayed again and very windy, so we went to wait out the storm in a coffee shop.  (photocred: Anna) 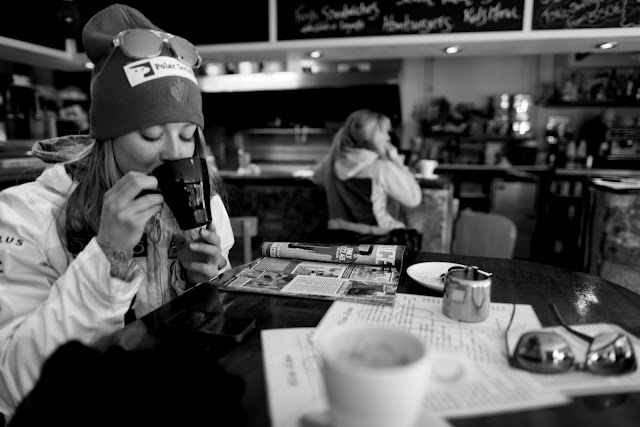 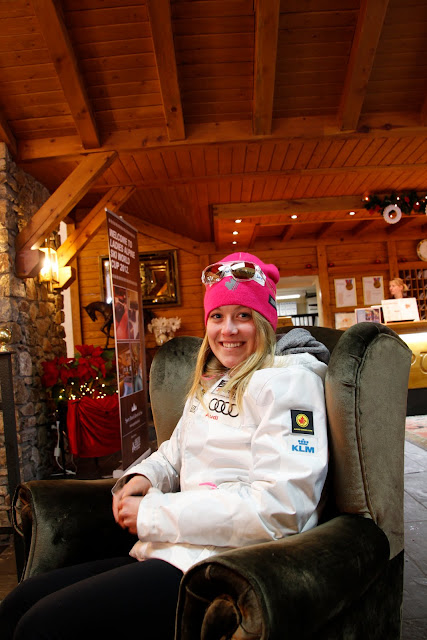 We ran into Chemmy in one of the gossip magazines! (3rd girl from the left!) (photocred: Anna) 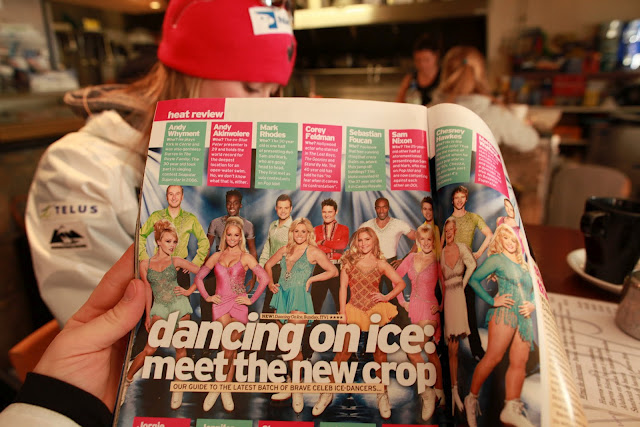 In the end the race was canceled, so Anna and I went to explore the small town. 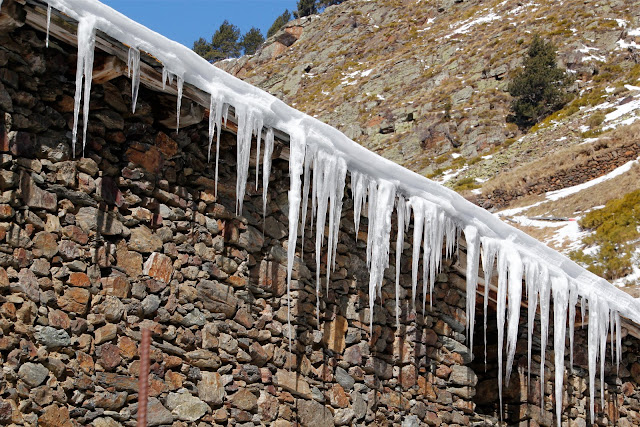 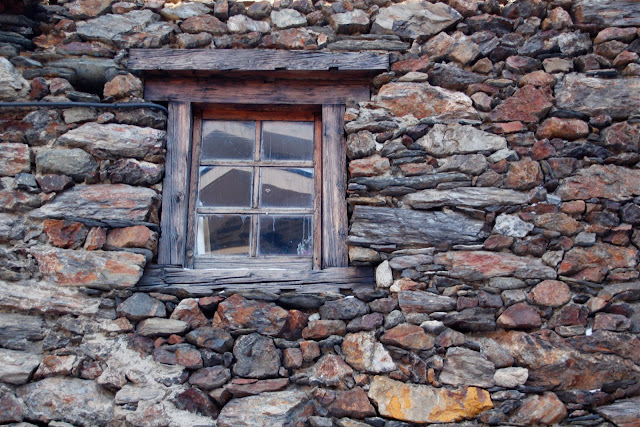 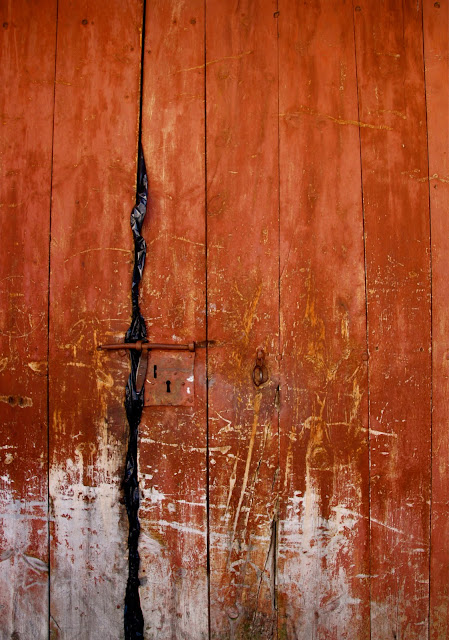 A doorway with no gravity? (photocred: Anna) 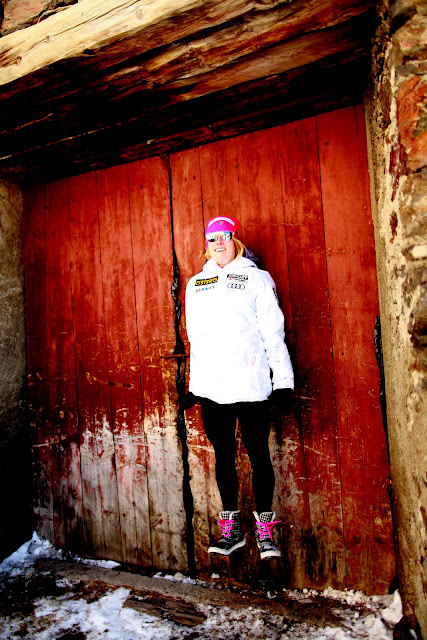 In the morning Tim sent me a text message and said that my name was on one of the gondolas, which confused me, so I went to check it out. I guess they put the name of the people in the top 30 on the gondolas! It's no Kitzbuhel gondola, but I still waited 15minutes for mine to come down. Tim won the bet that he made earlier in the day by saying that I would do just that. I guess I'm fairly predictable. 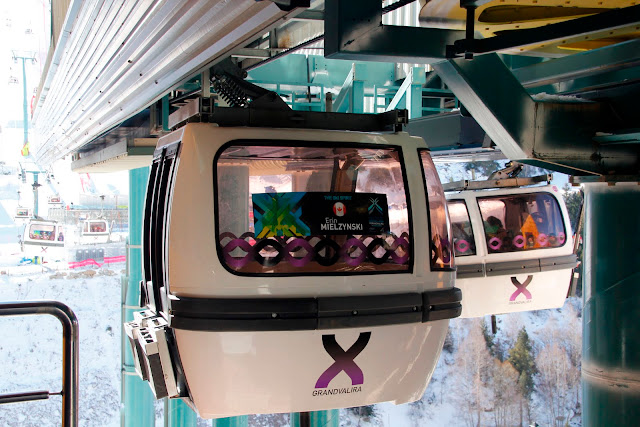 In the end our slalom was switched to Saturday and the last GS on Sunday. Changes like this are sometimes tough, however for me it meant that I was allowed to race my first GS World Cup race! One of my goals for this year was to race in a WC GS race, and it feels nice to conquer even a small goal.

I felt ready for the slalom. The hill is my kind of hill, steep, and the snow was perfect. The top of the course was quite flat, which I usually struggle with, however on my first run I was only .40 off the leader, which is quite good for me. However, as I came over the steep part of the pitch I got back, late and thrown off of the line. I almost missed one gate, but just made it and then came flying into the next one. I threw my skis to the side to just make the gate, almost stopping. After this I just let myself go. Nothing mattered anymore, so I went as hard as I could. 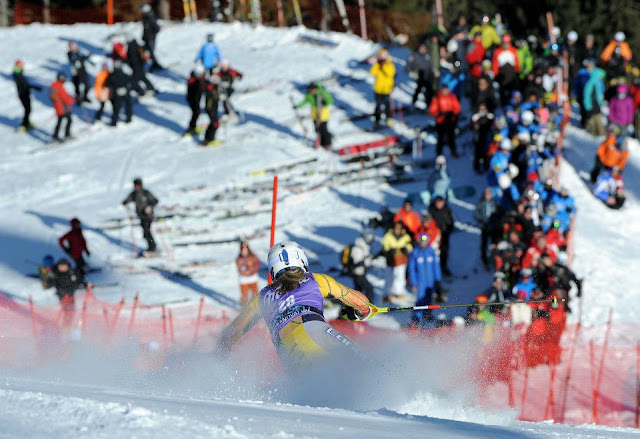 I ended up 27th on that run, 2.5second off of the leader. I'm lucky I got a second run. It was a bad mistake, but an okay place to make this sort of mistake. My skiing was more characteristic before and after, which was encouraging. 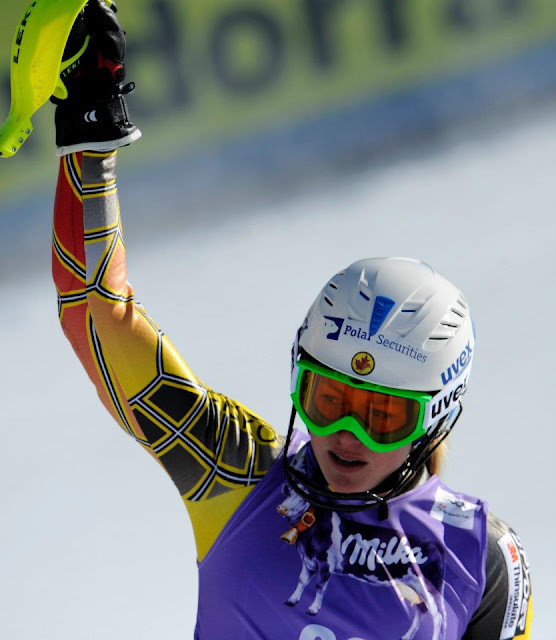 I was ready to attack the next run on a clean, perfect course. I was determined to finally see a green light when I crossed the finish. 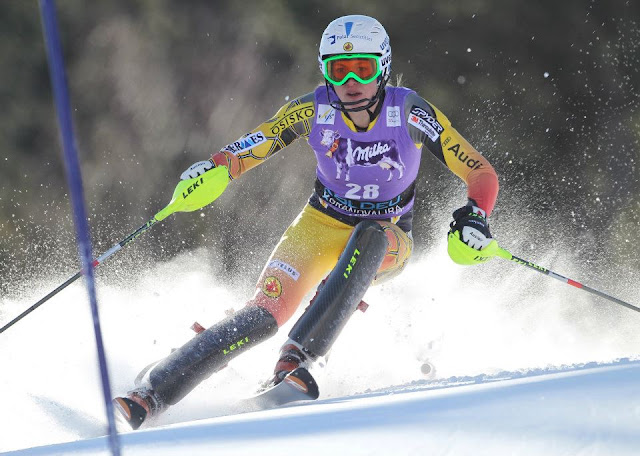 This run I felt better, however I still struggled a bit at the top and at the end of the course. However, finally I saw a green light as I crossed the finish line!
My fastest section was the middle section, in the wind storm! 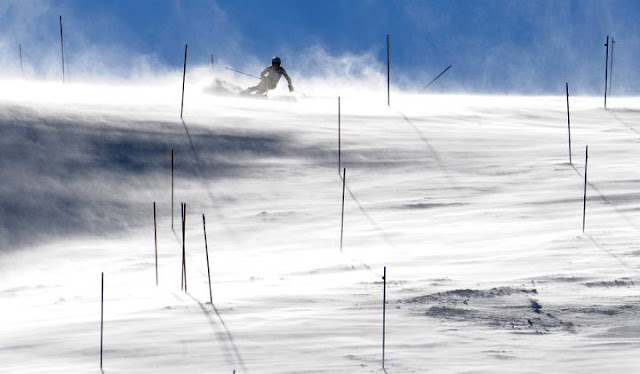 *All skiing photos are from alpinecanada.org.

Today, I fulfilled my goal of racing a gs race this year. I started 62nd, which gave Mitch and MP time to come back up and give me a course report. As I waited I was able to see them rock their runs! After first run MP was 14th and Mitch was 9th. I felt fairly solid on my skis, especially considering that that was my second day in GS gates since our races in Aspen. I ended up 48th first run, 4seconds back. I really want to train more GS and come back charging!
Mitch finished up 7th and MP finished 21st!

In case anyone missed it, Ben Thomsen came 2nd in the most recent DH race in Sochi!!

Now Mitch and I are headed to Sochi to test out the Olmypic tracks!! I really do have speed on my mind now!!