*Contains a few scary stories/videos (but no crashes)

Before I post the "interesting, get to know us" pictures, I'll admit.... I have speed on the mind.
I used to do quite a bit of speed when I was younger, racing on tracks such as Lake Louise and the men's track in Whistler. I usually felt nervous before speed races, but I had a lot of fun and was always interested in what the day would have in store for me!
When I raced my first downhill in Mount St. Anne, I was so nervous that I thought the finish line was higher and actually stopped before the finish line... rookie mistake.
Speed Tip #1:... DO NOT stop before the finish line. This is not fast. The next downhill I did was in Lake Louise when I was 16. I was starting number 45, and I was a bit nervous for the race. When I was standing in the gate there was a hold on course because a girl on my team hit the fence and was being taken down on a toboggan. The wait was so long that they send a forerunner who flew off the jump at coaches and hurt herself. Next thing I knew the starter was saying, "Racer number 45, you're up." 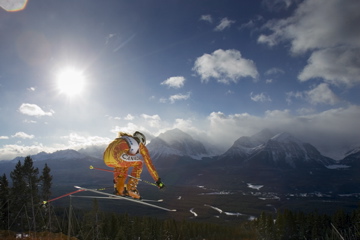 I had some fun races this year, and the following years; trying to find the patience which I lack, finding it hard to trust the line that I was on, and trying to make up for lost time on the flats!

The toughest downhill I ever did was the men's track in Whistler, yet it is also the most exciting and thrilling track. I will never live down the story of losing my outside ski coming into one of the steepest parts of the course (Weasel). I flew over the break-over and tried to put my ski down, but it wasn't there. I flailed down the rest of that pitch on one ski, and upon reaching the flats, screamed and threw myself to the ground... Girly I know.
Not quite as graceful as this...


Or Bode skiing up on the fencing...


Now that I am mainly a tech skier, with the occasional speed race now and then... I have speed on the mind. I miss the feel of being in the air, and trying to find the most aerodynamic position. Yet, in saying that, I still feel the nerves in my stomach.... unless I ate something bad for breakfast. 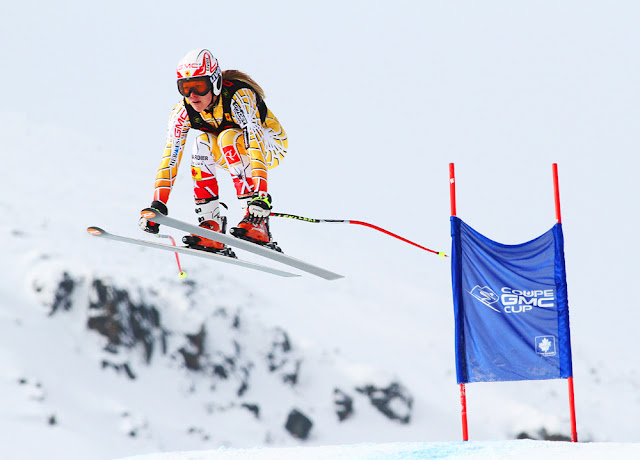 And now today, I am cheering on my teammates in Lake Louise (ladies) and Beaver Creek (men). Unfortunately, I will be on the plane when these races take place, so when I speed off towards Burlington, they will be speeding down the mountain towards the finish line (without stopping!).

Here is a point of view that Conrad Pridy (Men's Canadian Speed Team) made of Lake Louise during a training run! (The skiing starts at about 1:10 into the video!)

Or checkout my previous blog posts for how to watch on live timing or online!!