NOR AMS & 13TH IN COURCHEVEL

The past week has been CRAZY!
On Dec 11th, I traveled to Panorama for two Nor Ams. It was good to see people that I usually don't get to see, and it is always nice to race at the same place as Kevin.
I felt ready to go on the first day. I was leading after the first run, with Anna right behind me. On my second run, I made a mistake up top and really tried to attack and make up time on the bottom. When I finished, a story that my mom once told me popped into my head. She said that this one man was racing a cross country race. He fell, struggled and fought for the whole race, and ended up by himself with seemingly no hope of catching up to the people in front of him. He thought about giving up and giving himself a break, however he wanted to push through and finish at least. This man came through the finish in first, without realizing where the other competitors were or what struggles they faced. Obviously I faced this to a MUCH lesser extent, but the story popped into my head nonetheless. I ended up coming away with the gold, but it was a tough race in general. Our Canadians placed 1st, 2nd, 4th and 5th.

The second day was much more consistent. I tried to attack my first run like I did on the bottom of my second run. I had a solid first run, 8tenths ahead, and a solid, but safe second run. Eve killed the second run! I barely came away with the gold, with my skiing twin right behind me with the silver!

After that we drove to Calgary for a flight to Geneva the next day! After a delayed flight and long drive, we arrived in Courchevel to find this... (photo:Anna) 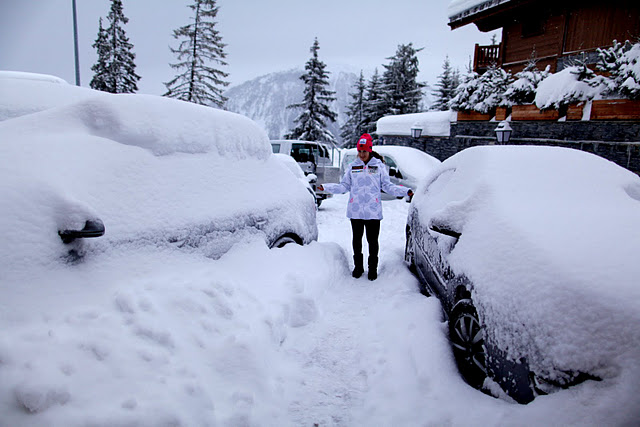 At 8pm (After we arrived) we had our meeting and heard that Courchevel got at least a meter of new snow. The race was on for Saturday, but there was less than 50% chance of running.
After inspection the next day, the race was canceled. (photo:Anna) 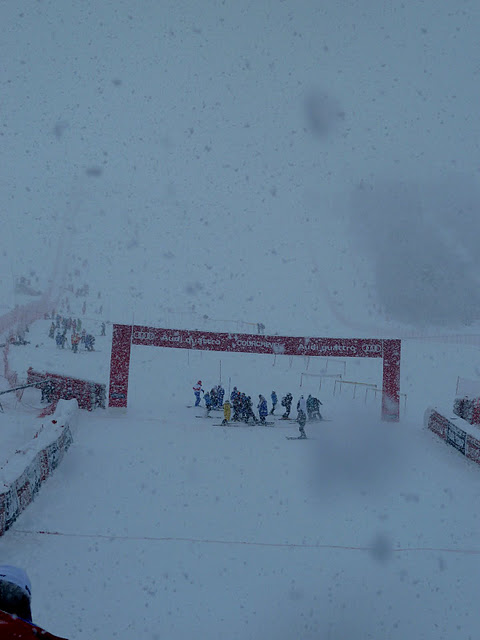 SO WE WENT POWDER SKIING!! You know there is a lot of snow when they have to blow snow out of the lift lines... 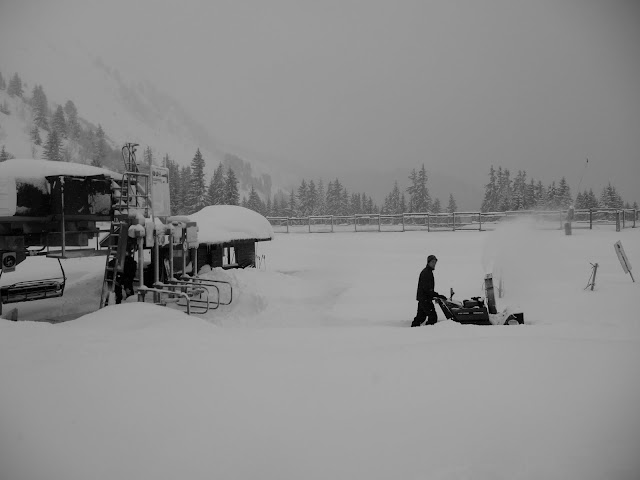 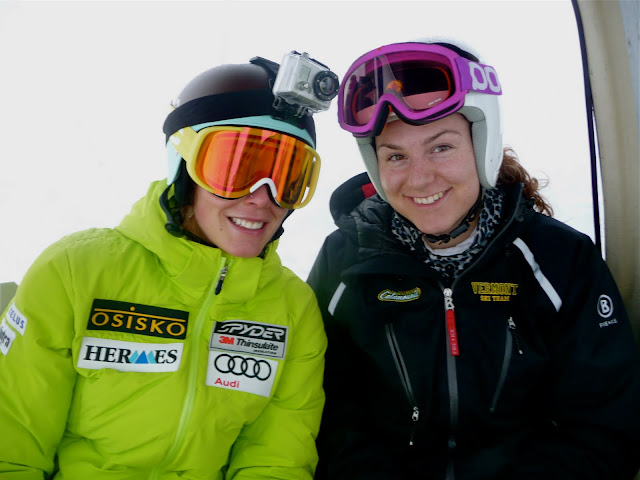 I admit that I did have some trouble keeping my tips up and fell a handful of times... not so much fun after the 5th time...

That afternoon, they watered the track and it turned to ice! My start number was 33 and I felt much more ready to race than Saturday. I told myself to believe in the start, and I attacked! I ended up 14th after the first run. It was a bit rough, but much better than Saturday, and it was the kind of fight that I needed. (photocred: Andy Mielzynski) 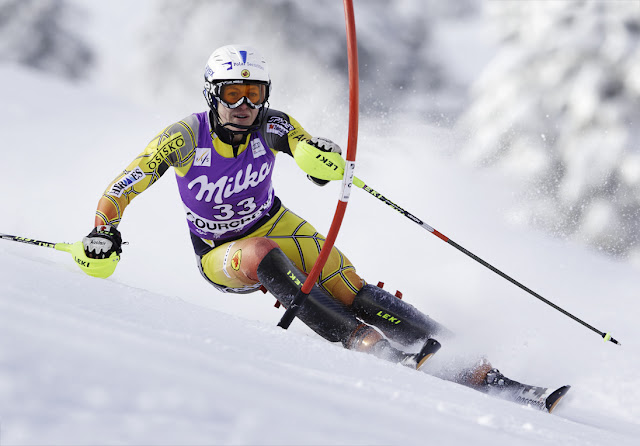 The sun came out for the second run, and I tried to repeat my first run. I attacked out of the start, but made quite a few mistakes during the run. After each mistake I told myself to make up the time and keep going. My Mom said that I proved myself to be a cat... I prefer bear, but I don't get much say in these matters.
I fought to the bottom, and ended up placing 13th overall! Which ties my best result to date!!
We had 4 Canadians in the second run, which is the most Canadian women that we have had in a second run in a long time. Mitch placed 8th first run, but unfortunately straddled on the second run. She was going for it! Anna placed 11th from bib 47! Elli earned her first World Cup points placing 23rd. Eve attacked right out of the gate, but straddled a pin near the bottom of the course.

After the race we relaxed for a while and then played in the snow! (These next pictures are all Anna's!) 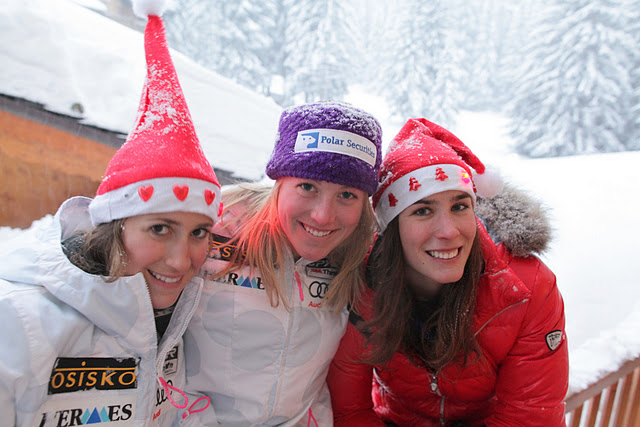 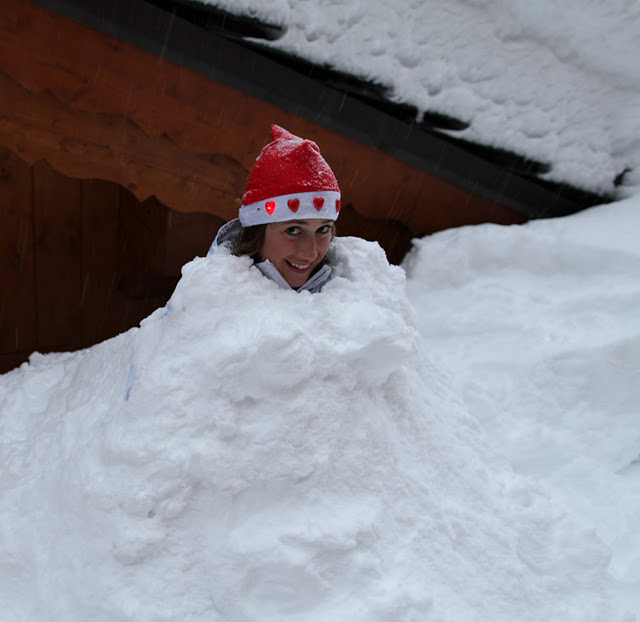 We love MP's cold curves! (How does she still have Swag?!) 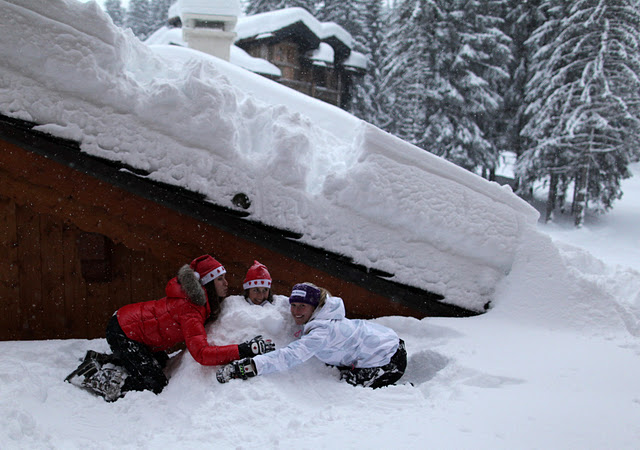 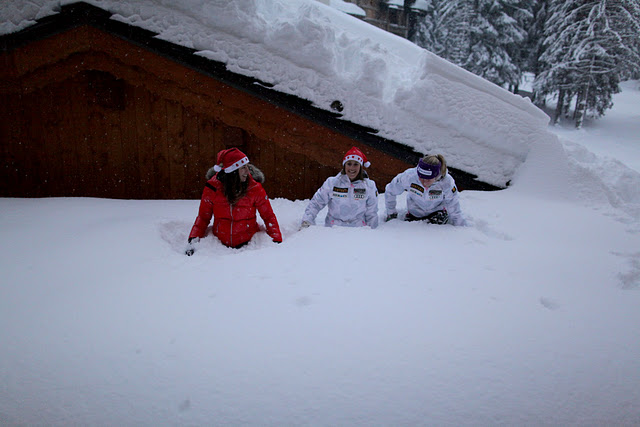 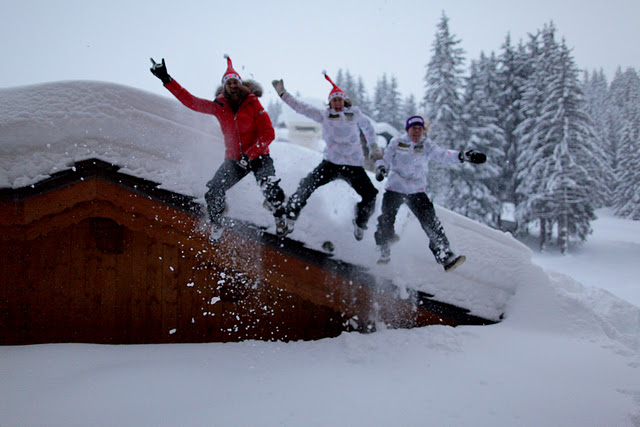 Christmas is coming!! However, we have one more race before my Dad and I travel somewhere new (we don't know where yet) and celebrate in a father/daughter sort of way.

Until then, please snow at home.... and hold off the snow until after the men race on the 21st here!
I know... I ask a lot for Christmas!
Email Post