After attempting to race at Courchevel, France we headed to Chamonix, France for World Juniors. 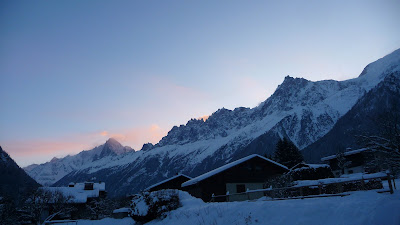 It was nice going there because there were new faces there. The first day was FREEZING!! The girls raced super g, while Britt, Eve, Elli and I trained slalom. During the first run, the zipper on my jacket broke completely. I would end up skiing down with the zipper still up around my chin, but the rest of the zipper undone below that... aka a batman cap. So to look "cooler" I decided to tuck my jacket into my shorts. After training we watched the race.... STEPH came 10th!! 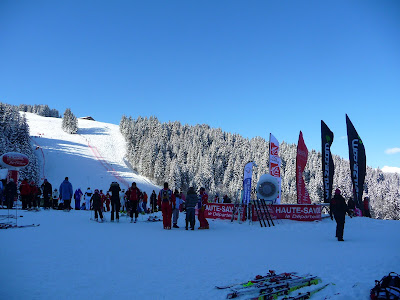 The next day was our night slalom. We got to sleep in and spend as long as possible at breakfast. We did an activation warm up and got ready to race. My first run was pretty conservative, so I didn't have much to lose second run. I ended up coming in 7th, which was definitely a lot better than last year, however I didn't reach my goal. They showed our race live on Eurosport (a tv channel here), which was pretty cool. The guys could watch our race from the hotel. 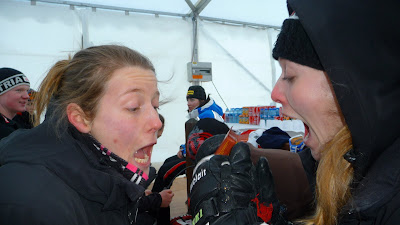 Free Food!
We took the next day off and trained GS the next two days (while the girl's downhill ran). Our first day of GS training was... interesting. We trained in the afternoon after the girls training run. We meaning Maddy Irwin, Britt and myself. There was only one run under the chair that was really flat at the top and had a road going through the middle of it. But no worries, as Speedy would say, they built a jump so that we could gap the road. I will add that the "small" jump that was built was as tall as me and had a significant flatspot behind it that we would have to clear. So we walked our skis across the road and skied the course in 2 sections.
Finally our GS race came around. The boys races were all pushed up two days because weather was coming in on the Friday that we were supposed to race GS. Well... for once... lucky boys! The day was not very enjoyable. It was foggy and snowing very wet snow. We were all wet and chilled to the bone by the end of the day. I think almost everyone was in a bad mood. The start was moved down, the hill was pretty flat and the course was short. Without saying too much, I was not very happy about my day.
We packed up that night and drove to Munich, then continued on to race a slalom on Sunday at Krakauebene, Austria. .... And in here, I got sick. Overtired, sniffly, no power, sick. I raced the SL (3rd.. but far back). Then we had two days off... filled with kaiserschmarrn and the best pizza I have ever had in my life! 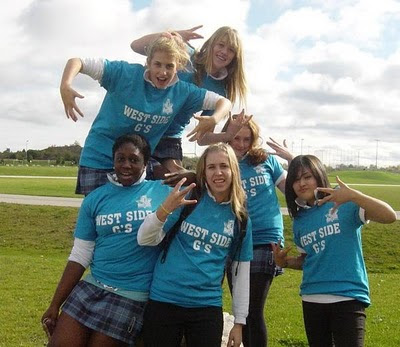 I miss this... and those that are missing from the picture. (Gina and Christina!!) 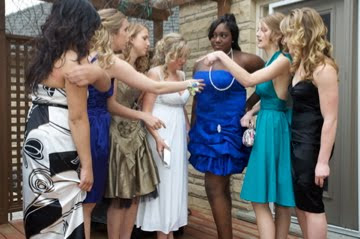 And this... minus the heels. 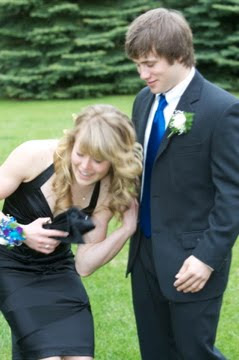 And this boy! (Who has now made his writing debut... at least to me) 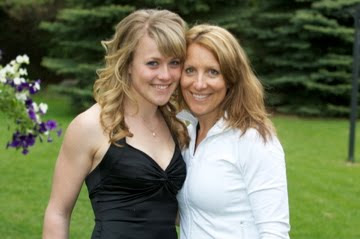 And my family (note: Mom is photogenic in this picture) 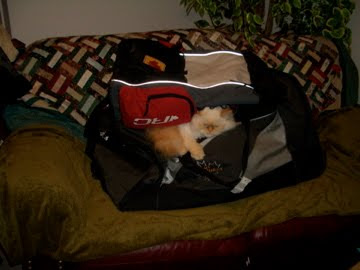 And this... minus the packing leading up to it.
And cooking, my cousins, Guelph, Steamers, English TV, etc etc!
We race one more day (tomorrow). Then we come back to Canada to train for 3 days (at Nakiska) before heading to Whistler. And I get to come back to all of this.
Happy Valentines Day! Eat lots of chocolate!
Email Post