TiK ToK on the clock

Since I have last written, we trained a few days in Reiteralm, then headed from the hill to Maribor, Slovenia for the last slalom WC race of the year (other than World Cup finals). Eve, Britt and I all had the opportunity to race and it was nice having the three of us there. We free skied gs on the race hill the first day, trained slalom after the GS race, then it was time to race. 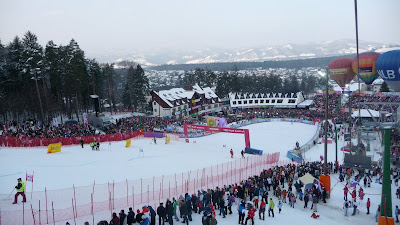 The new points list came out a few days before the race, so my bib number improved to 56. The hill at Maribor is very flat at the top and then a bit of a pitch. All in all, a fairly boring hill. However, the course that was set was extremely tight an turny. 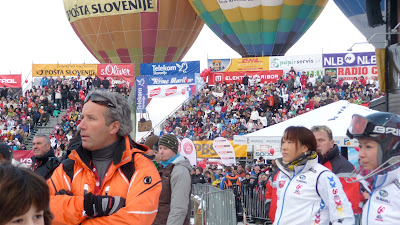 It was pretty dark the morning of the race, and shortly after the start it began snowing like crazy! It almost looked like a night race because all the lights were on (but the visibility was worse). But, it was slalom and these things have a much smaller effect if any. 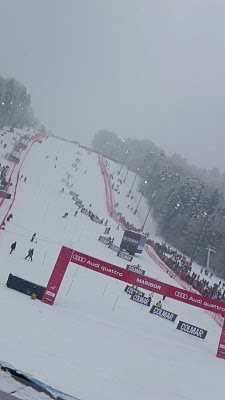 When my time came, I was ready to “throw down”. My head was in the game and I was ready to go for it. However, my body didn’t feel the need to follow my mind. My run was a bit better than Flachau since my head was in the game, however my run was again, fairly disappointing. It was an amazing experience, and every race, World Cup or not feels like it is just one step closer to figuring everything out. To finding that moment when everything makes sense and clicks. 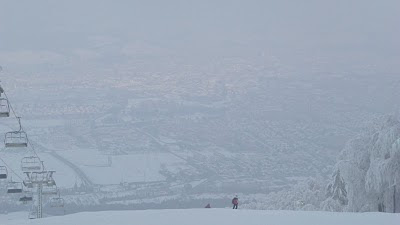 The view and the snow clinging to the trees.


We enjoyed the complementary lunch, which is extremely different than any lunch for racers you would see in Canada. Pizza breads, chicken wings, pasta, etc. Then we headed outside to cheer on Mitch and Brigitte. It was exciting watching the second run and hearing Slovenia cheering for their athletes. I hope the Olympic support for Canadians is 100 times as strong. Skiing and especially slalom is so exciting to watch because anything can happen. People can win that were never expected to move up placings at all. We ended the day hearing that Brigitte finished 22nd on the World Cup rankings and made it to the World Cup Finals in Slalom, with Anna who is injured right now and couldn’t do the last few races finishing 24th.

Even though we didn’t get to see much of it, the town is actually very interesting. There are tunnels that run underneath it where people used to hide in times of war. However, now they are used for fermenting wine. There are kilometers of tunnels extended beneath the city with (as I understand it) wine tasting, buying, bands, etc.

After the race we headed back to Kirchberg for a much needed day off. We raced GS in Marie Alm, Austria, the next two days. The first day actually went pretty well considering the somewhat soft snow, flat hill (not my specialty), and deep field. I made a mistake my second run which cost me some spots, but I made the mistake doing what I have been trying to do for a while, so I am okay with that. We went for pizza that night. And I cannot explain how much I love pizza in Europe. The thin crust, big portions and amazing taste! The second day of GS did not go very well. The courses were fairly straight and the times were very tight. It was another day at the office and I am still looking forward to our next GS races.

That brings us to today. Today we trained 4 runs of slalom, on the Gais(ice)berg, which has really livened up after being injected. It was fun training and I am excited to try some things out come race day. Right now we are driving to Melchsee-Frut, Switzerland for two night slaloms, one Europa Cup followed by one FIS race. We came here last year for my first night slaloms. We just crossed the border and the only and Tim gave was “Canada Schi Team” and the man waved us through, no passports. That would NEVER happen in North America… so many little things are different here. Including the AMAZING Milka chocolate.