This will be a short one... maybe. Just to end off the season and start in on my break time.
After Calgary, I flew home and had a nice evening with my dad, scallops and shrimp stir fry!! Then I went home for about 24 hours and did laundry, went shopping, drank many steamers! and relaxed with my mom. The next morning I drove to Quebec with Joey and some of the Ontario Team boys.
A day later, the races began. Our first race was a slalom. The first run went fairly well, but my second run was not very strong. I ended up 4th that day.
Every day it got progressively warmer. Our next race was also a slalom, and it was a very warm day. The race was held for 30minutes after the forerunners so that they could salt some more and try to make the track better. I ended up 1st after the first run, and held my spot (finally) on the second run. The track actually held up pretty well considering that it was about 18C outside. We were all trying to hide in the start hut before our runs to get out of the sun.
The next day was the first GS and it was THE HOTTEST weather I have EVER skied in. We were originally supposed to do 4 runs (2 races) because they weren't sure if there would be enough snow, etc the next day to run another race. During inspection, there was running water just after the pitch and the course workers started digging out a trench. Our start was delayed by an hour so that the groomer could bring in snow and they could salt the snow over top of the "river". We waited inside because there really wasn't much snow to free ski. The track ended up fairly hard, but pretty bumpy as well. I will not lie, I was being rocked by the bumps. After the first run, we were told that they were going to try to run 3 runs that day and only one run the next. In between runs, we sat on the deck in tank tops eating a picnic lunch that the Ontario parents brought! Life savers! Second run was pretty bumpy and everyone was feeling the effects of the sun and the end of the season. I ended up 4th that day and scored by a bit. They decided (After a little persuasion) to cancel the 3rd run and run the entire race the next day.
The next day was warmer still. The hill wasn't in great shape. The course workers worked really hard, however many of the girls didn't feel comfortable racing in those conditions. We decided to be Did Not Starts (a better way of saying we pulled ourselves) in order to save ourselves for summer training and next season. There were many opinions about our decision and I hear that the race ran smoothly, but I felt uncomfortable racing and wanted to make sure I was healthy going into next season.
I drove over to the boy's slalom race and watched Kevin come 3rd! His second score of the year! 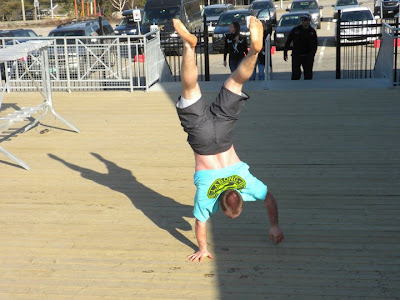 Kevin b/w runs at the slalom (Yes he still had another run to do) Note- Sunburn on back. 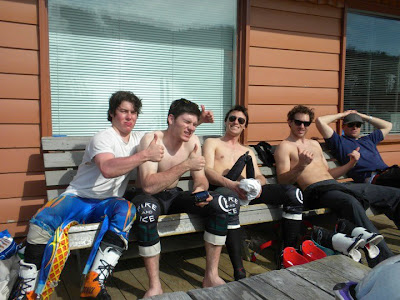 The Guys between runs. 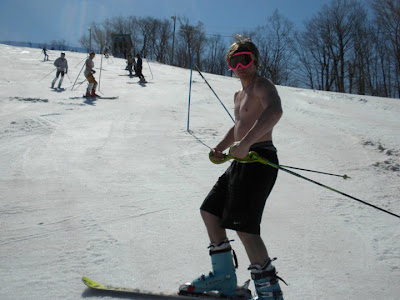 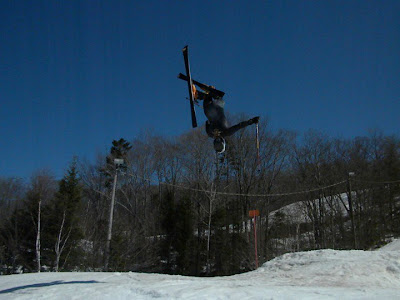 Kevin playing around after the race. He showed up those "skittle" coloured, loose clothing (?) freestylers in his spandex. Note: always wear a helmut.
(Photo Cred: Donny)
Email Post