KELLY helped fix my pictures!... so here is everything else. Sorry this took so long!
The last few days have been very busy in my "time of rest(?)"
On Wednesday, I drove down to spend the night with my dad. We woke up at 5:45am to get to the airport on time. I had to make sure that I looked ready for a luncheon and meeting at the house of commons. When I arrived in Ottawa we took cabs to a hotel, where some of the other athletes were staying, to get ready. At about 11, we headed for lunch at another hotel. After lunch, we headed to the House of Commons. Anna and I walked into the room first followed by the other athletes that came. It was absolutely incredible walking through the cameras and heading through the doors to hear the cheers of the people in the house of commons. We weren't allowed cameras or cell phones, so I can't show you the experience, but we got them back later in the day. 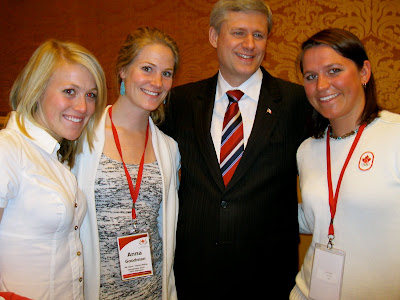 Say Whattt?
After being introduced and shaking some hands (Stephen Harper's) we headed to another room for a reception. You can tell that athletes had entered the room, when a huge mass of people in red jackets moved quickly to the snack table. 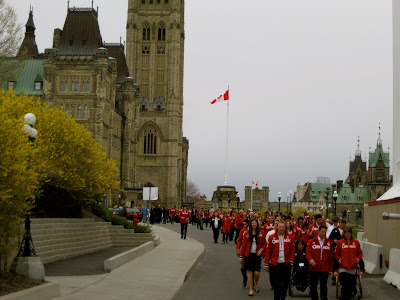 At the reception, the youth choir sang and all of the medalists were awarded with a flag that flew on Parliament Hill during the Olympics. 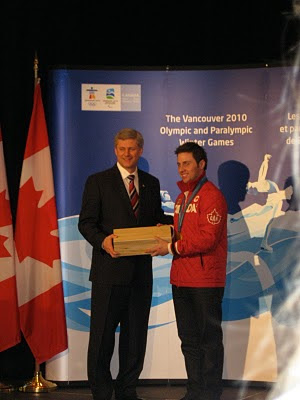 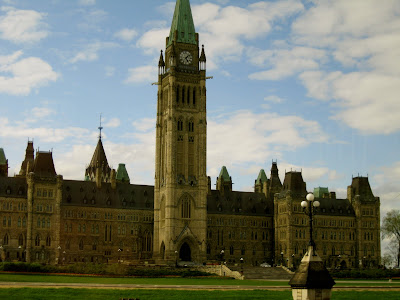 After the reception, we headed to VIA rail, to make our way to Montreal. While on the train, Ben Mulroney was interviewing medalists in the seats beside us for E-talk. The tv men would have to take breaks while announcements went on or when the food carts passed through. 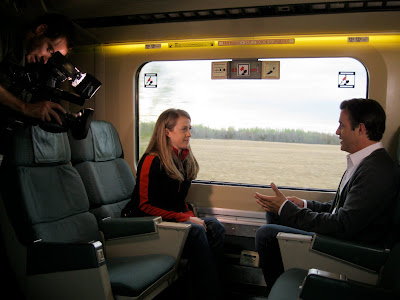 After we got off the train, we took a bus to our hotel, checked in and picked up our bags. We immediately went for Indian food in Montreal.
The next day we had to be downstairs in the breakfast room by 8:00am. There were Cheerios tableclothes on the table that were written on in permanent marker for all of the athletes. Cheer! In the room, Good Morning Canada was filming their show. The weather man could remember.... everything. The men behind the scenes would turn a small tv screen towards him so that he could see the weather, but of course this screen was covered in static. I guess it was snow all the time for those cities.
After breakfast, we headed to the parade. All of the athletes were organized into their designated sports as the people got situated on the street. Our float was connected to the back of a truck. 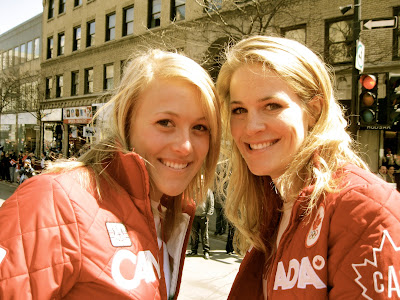 Anna and I on the float.
Whenever we passed a big crowd we would all jump up and down making the float (and truck bounce). Once the float started bottoming out, we were told to stop. The parade was incredible. I have never seen that many people gathered to see a group of athletes during a parade. 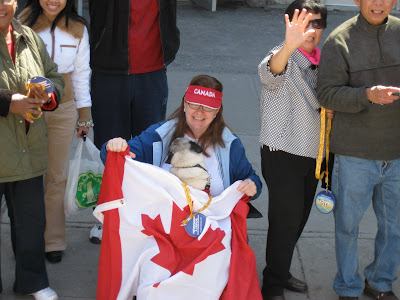 Do people and their dogs look alike? 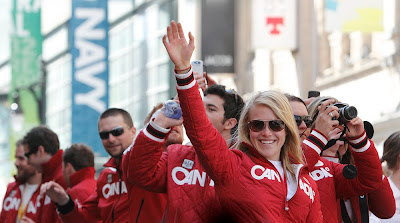 Thanks for coming Dad.
I am very glad I went... it was moving to see how much people care and how Canada is behind their athletes 100%. After the parade we were given McDonald's, announced one by one onto the stage, and given cards to sign and handout.
Then we headed down the the Bell Center for a test run for the Hall of Fame. Everything looked amazing and ready to go. Except for the athletes. So we ran back to our hotel to get ready. We all met in the lobby, looking uncomfortable in our heels and headed to the Bell Center once again. To get to the main room, we had to pass a group of photographers shooting the red carpet. 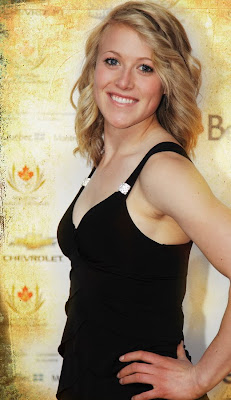 The night moved smoothly from there and consisted of performances by Canadian artists, many inductions into the Olympic Hall of Fane, an amazing dinner and my feet killing me! 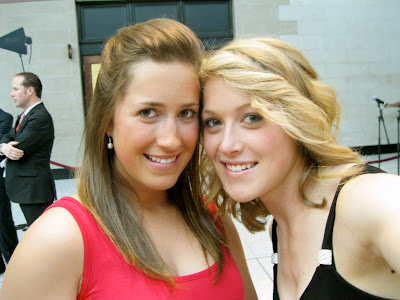 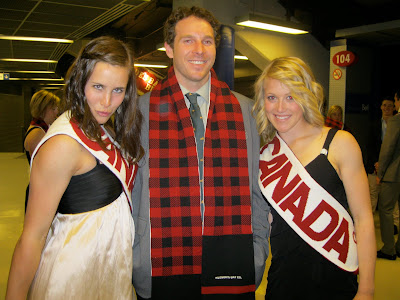 Mitch, Biggs and I 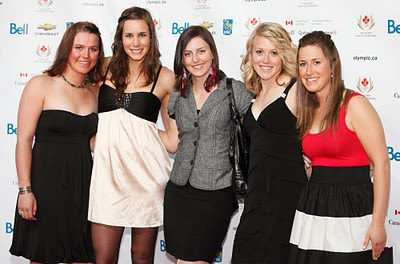 Shona (I miss you already), Mitch, Kelsey, Me and Mp!
The next morning, I woke up early, cancelled my flight, and drove to New Hampshire to visit Darmouth with my Dad. After walking around and seeing the campus we drove to Burlington, so that I could see Kevin for a few hours. After these few days, I think I was beyond the point of being tired. The next day Phil Brown, Kate Ryley, and I drove back to Toronto. We were excited to get home and relax for a few days. However, this didn't happen quite how we had planned. We ended up taking a two hour detour... which was not in the plan.
Email Post