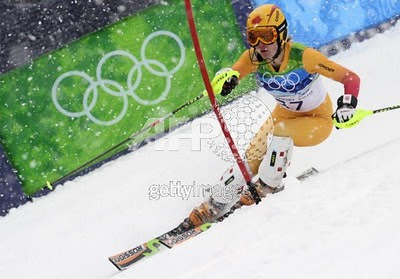 A new picture from the games...
On my way to the Canadian Nationals, I had another EPIC travel day.
I booked a shuttle to pick Elli and I up from the hotel in Montreal and take us to the airport. However, in the morning, the shuttle filled up and they had no record of our booking. We went to the desk to ask them to do something and they said that they would call a taxi for us, but at our expense because apparently we hadn't called. I tried to persuade the people to pay for our cab, but no matter what I said they refused. To make a long story short, they should not be working at hotels trying to please people.... Isn't it said that the customer is always right? Well... I guess I was very wrong.
We got into the cab, and immediately the man said that we had to pay extra because we had so many bags and it wasn't "normal". Check in went smoothly and we went over to load our bags at oversize. I gave them my ticket, loaded the bags and they gave it back. I got into line at security, the man scanned my ticket and then I realized that my ticket said the wrong gate, the wrong boarding time, and that I was Oliver Roy traveling to Cancun. The people gave me back the wrong ticket... I had a ticket for the wrong person for the second time in a month. When the ticket got sorted out, I got in line again for security and of course they were fixing (or checking) the metal scanner in the line I was told to go to.
Everything else went fairly smoothly. We all packed into the team truck and headed for Nakiska. It was then that Tim told us that he had bad news and good news. The good news was that we were on our way to Nakiska, the bad news was that we would have to come back into Calgary the next day for physical testing (Aka the bike test to max).
My mom arrived when I did and my dad arrived a little later, so that made up for some of it. The next day we had a leisure morning and headed to the bike test... ie death. The bike test consists of starting at a certain wattage, then going up by 25 watts every 2 minutes. Also, every two minutes they prick our finger and check our blood lactate, then write down our heart rate. When our blood lactate reaches 6, we go up by 25 watts every minute until we fail. By the end, I end up wheezing and sounding like I am giving birth. Both very attractive noises I might add.
The next day was our gs race. I ended up 5th after my first run. The pitches were pretty bumpy because of cross ruts and hard, bumpy snow. But it held up pretty well for all people. Second run was just as bumpy and I'm pretty sure my tips were pointed into a leftover boy's rut at one point. I ended up 5th for the day and scored! Finally. The skiing wasn't great, but it was better than it has been.
The next day was slalom. It felt like I hadn't skied slalom in a while in the morning, which is weird because we had just raced US Nationals. I guess days just feel like that sometimes, and it works out for the better at times because I don't think as much. During the run, it just felt normal. I ended up first after first run, by about .5. However, after second run, I got bumped back to 2nd by a lot! Dang. Oh well, as I always say, "It's slalom, anything can happen".
After the race, I was drug tested for the 2nd time in a week. We headed to the Calgary Olympic Park for our dual slalom between the provinces. It was so warm and the snow was super soft, but we were all ready to beat the other provinces. I did not do much to help my team, especially when I fell before the first time.... embarrassing. If you want embarrassing stories just come to me.
We had an amazing dinner put on by the Olympic Committee and celebrated the end of the season.
Email Post