Yesterday was the best day of my life. It all started at 5:45am when I woke up to get ready for the race. I packed my bag with every piece of rain gear I had and we headed to the hill. That is when my day of surprises began. We arrived at the hill and it turned out to be a sunny day.

As a team we put Sarah Burke stickers on our helmets, and had Sarah in our hearts all day.
photo cred: Anna Goodman 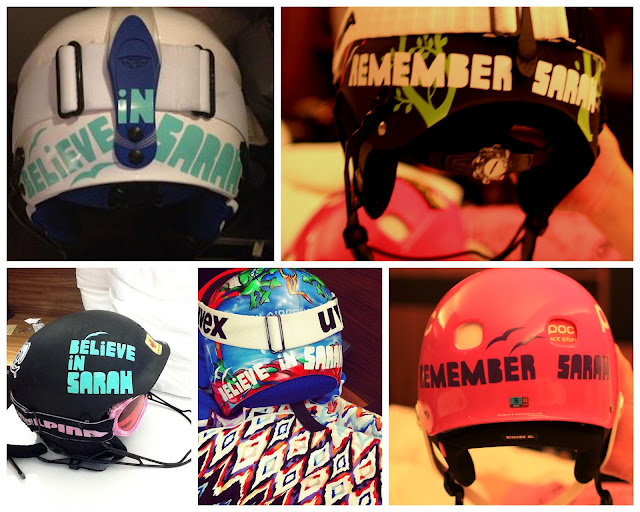 I warmed up, inspected and prepared to race. I felt a little bit of pressure because I really wanted to solidify my spot at World Cup finals (top 25), so that my parents could come to Europe and watch me race.  One time Mitch's mom told me that if you are ever feeling overwhelmed, you should trust what you have and leave the rest up to someone else, for me that has always been God. I said a little prayer for strength and that if this was a way to get me used to pressure then I would take it.

I stood in the start wearing bib number 24, and I knew that I had to ski just like I do in training. I couldn't force my aggression, I just had to ski. 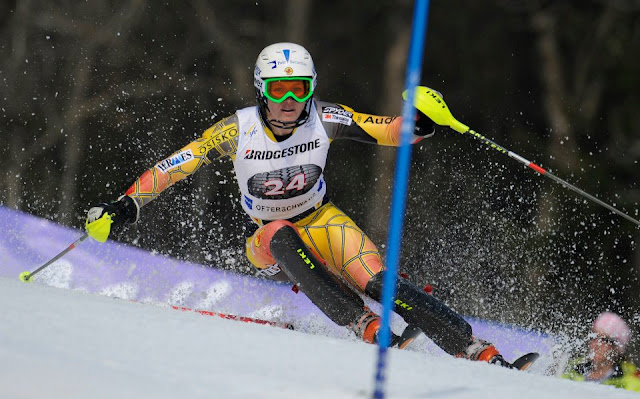 I ended up coming down into 5th! This was another first for me. I have never come down into fifth after the first, or in that case any run in a World Cup race. Immediately, I threw my arms in the air and screamed. 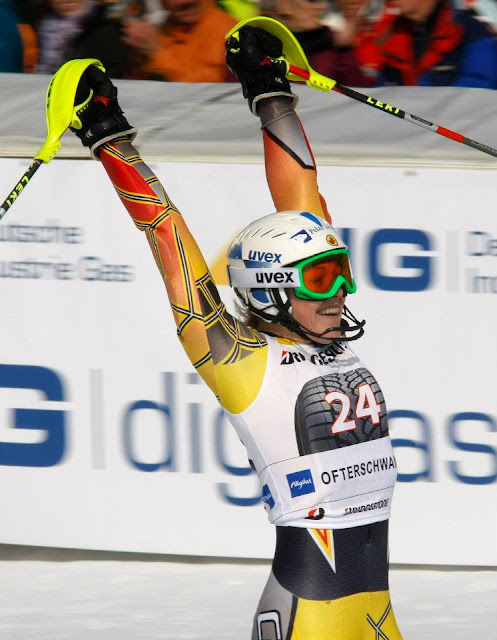 A lot of people have asked me about the pressure I felt going into second run. I think, I still felt more pressure to make finals. Even before the day began I decided to take each run as a single race, a run in itself. For each run, it was just me and the course.
I fought with my nerves a bit especially when I saw the line up for girls starting before me Tanja Poutiainen, followed by Marlies Schild, followed by Maria Höfl Riesch and then it was me. I think Jenny knew that I needed to make a dumb joke about it to get over my nerves.
I heard them announce who were the top three leaders just as I was about to push out of the start. I pushed out, skied two gates and the third one hit me in the helmet. I struggled a bit with the rhythm after this. I lost about 6thenths in total by the last interval and was plus about 0.4. However, I knew the part of the course where I could really go for it, and I took that opportunity. I crossed the finish line, looked a the board and saw a green light! I managed to come into the lead by 0.05, 5 hundredths of a second.
(photos: alpinecanada.org) 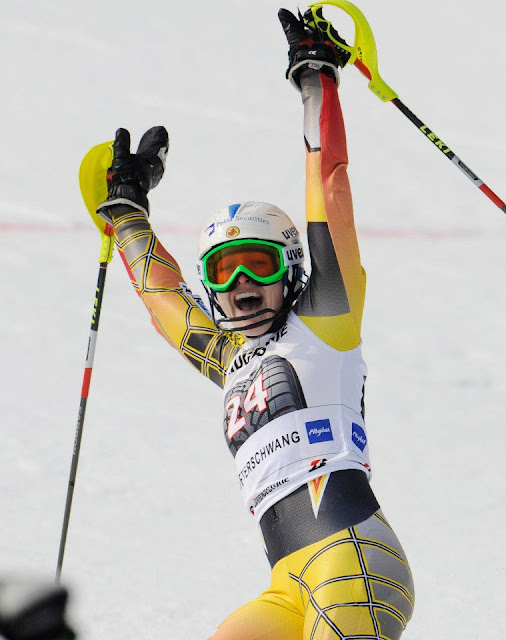 Then it hit me. The worst I could do was fifth! 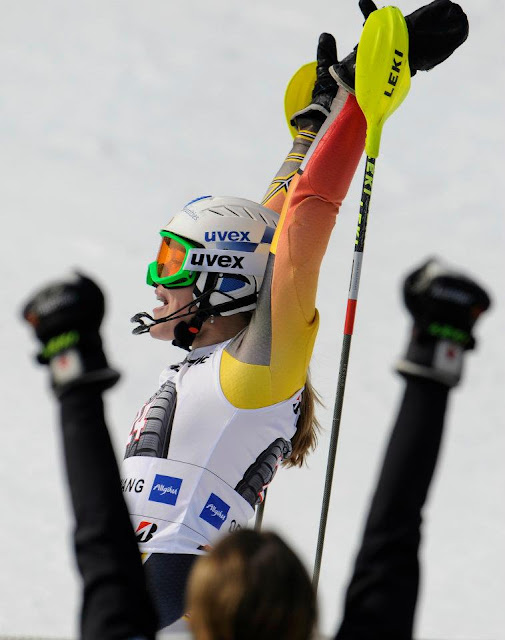 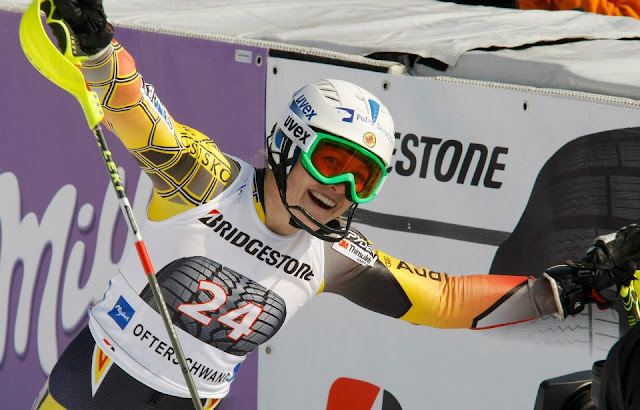 When I arrived in the leader box I was lucky enough to stand beside Resi Stiegler and Marlies Schild. As the last four races came down, I couldn't believe it when my name remained at the top of the leader board. Each person came down and Mielzynski remained at the top of the board. Resi and I couldn't contain our excitement and happiness!
These videos show how we felt quite well.
1)

I can't remember not having the dream of winning a World Cup race and yesterday... MY DREAM CAME TRUE!! I won!
(photos: alpinecanada.org) 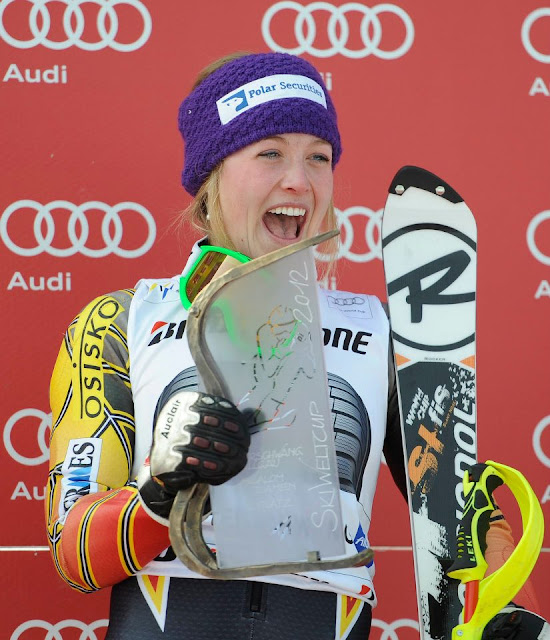 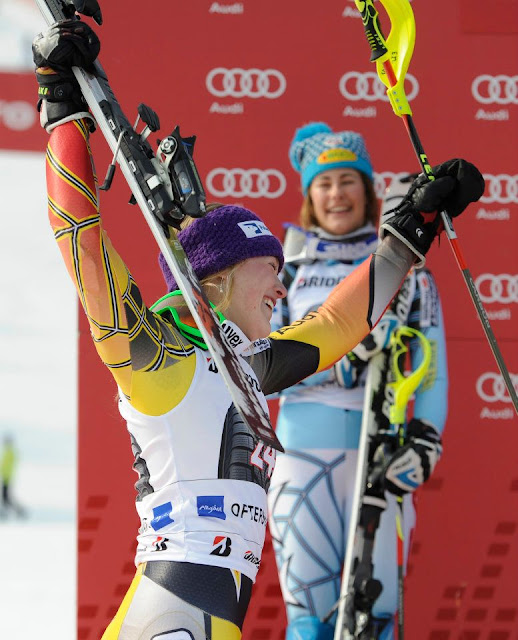 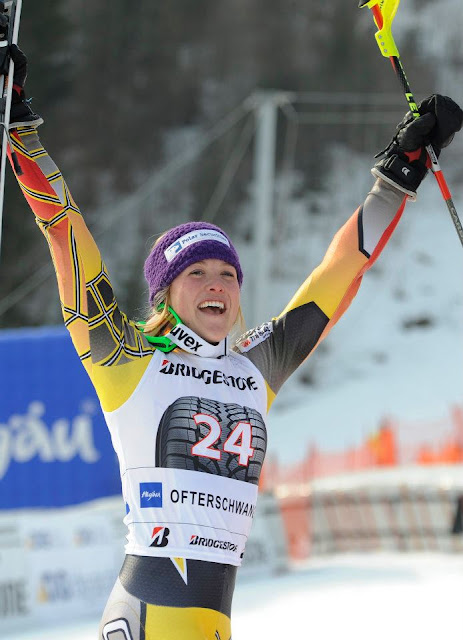 I was able to stand at the top of the podium and hear our Canadian anthem play and our flag was raised. This has not happened in a slalom race, for men or women since 1971 when Betsy Clifford won.
(photo from http://www.lessignets.com/signetsdiane/calendrier/fev/16.htm) 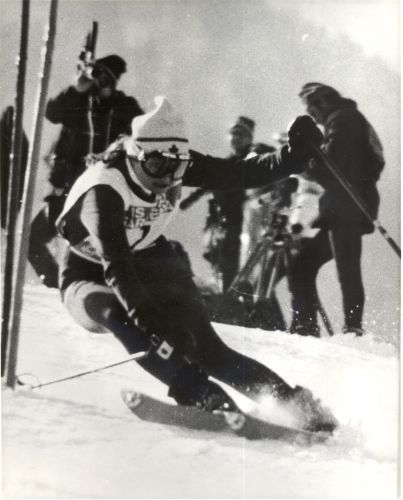 I looked at my teammates standing in front of me and saw the happiness and emotions cross their face. It was such an amazing moment for me, I had to shut my eyes for a moment and take it all in.
(photos: alpinecanada.org) 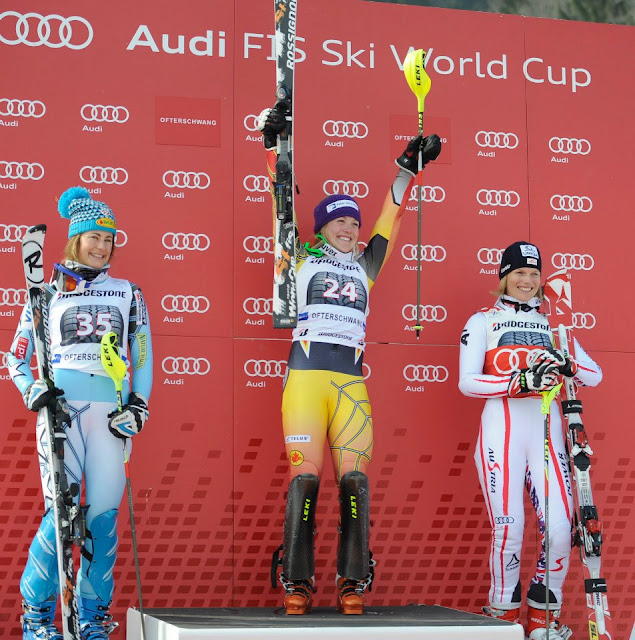 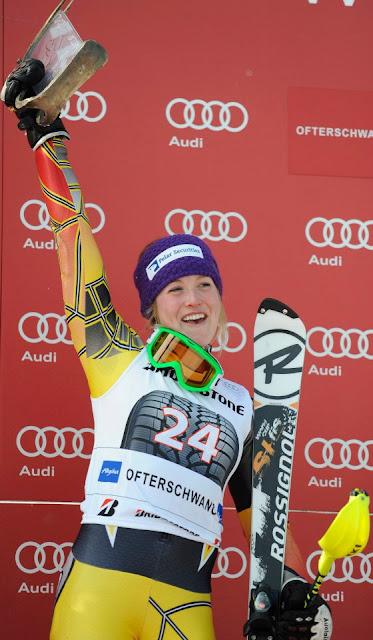 In all my life, I have never experienced that feeling. I was trying to hold in my emotions and my coach Hugues came racing down to me in the finish and he was shaking just as hard as I was. 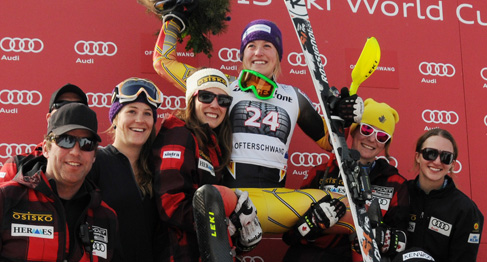 This one is blurry, but everyone is in it! 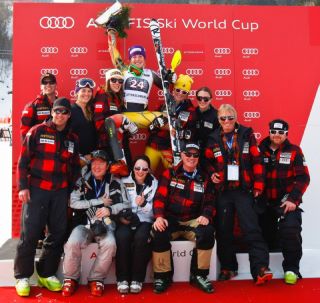 I have the best team in the World! Honestly, this is a success story that can be shared as a team. We have all worked hard and made changes together. They are my family on the road and I couldn't have done it without them!
(photo: Anna Goodman) 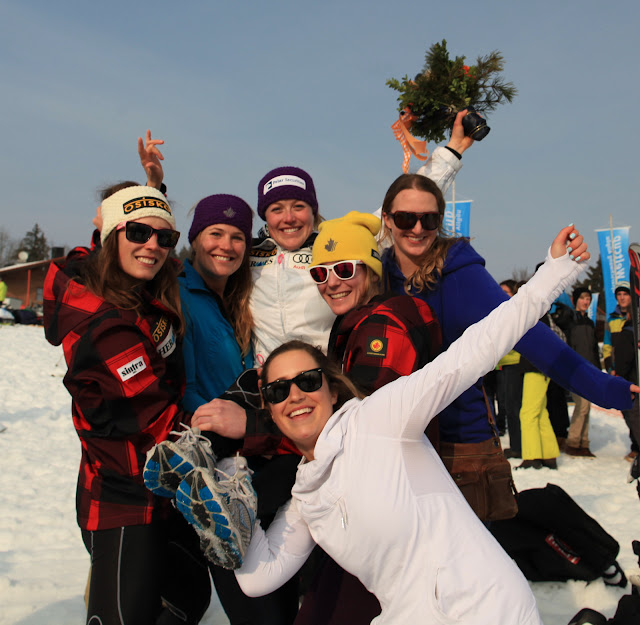 These girls made my day amazing and they were with me every step of the way. Yesterday, we joked around saying that after 40 years I broke the ice, but now the ice is broken. Any one of us can do this again, so there will be more to come!
Anna came 2nd the second run placing 17th overall and Mitch placed 5th overall!
I shared the podium with two amazing ladies. Resi Stiegler came podiumed for the first time yesterday after many years of injuried and struggles. Her happiness beside me the whole day was more than I could have asked for.
(photo: Michael Bauer) 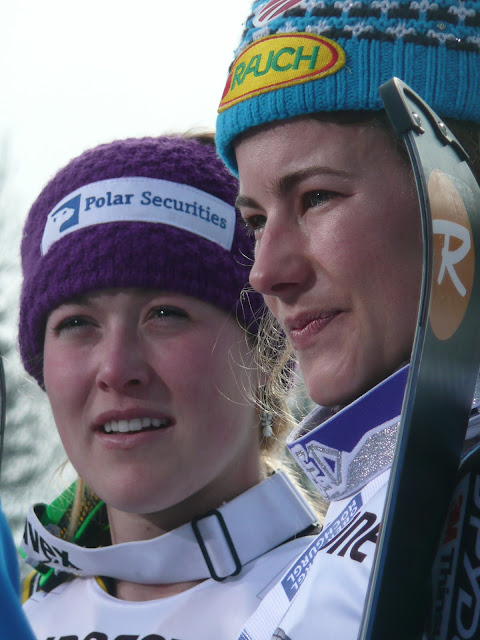 Most people know Marlies Schild because she has won nearly every slalom race this year. Marlies was amazing yesterday. She showed us what to do, where to stand and who to talk to. And even after we proved ourselves to be rookies she complimented each of us with a smile on her face.
The rest of the day was filled with quite a few interviews, so I was able to work on my media skills!
(photos: Michael Bauer) 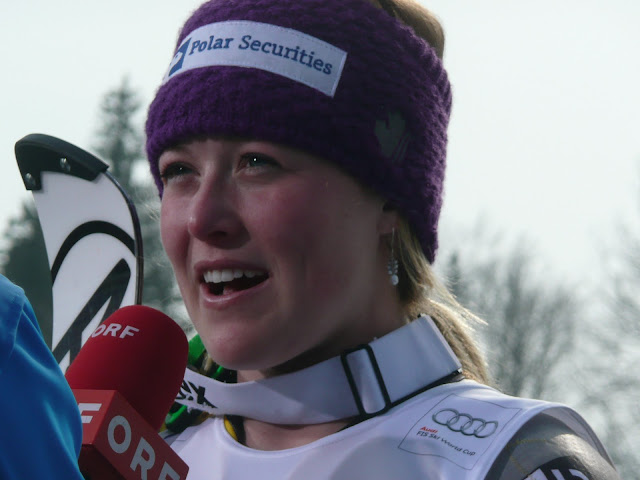 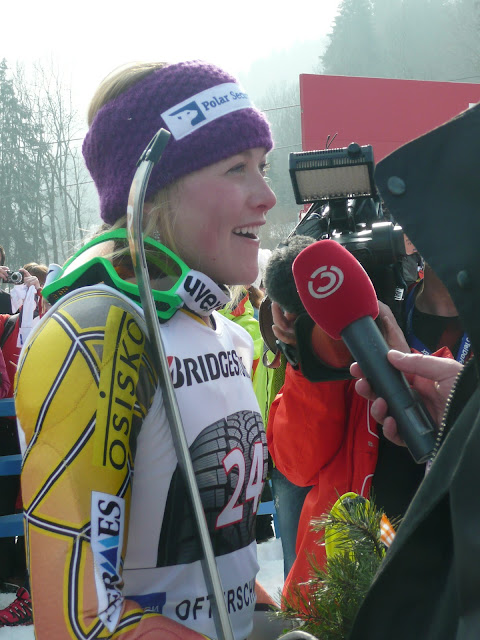 On Saturday night Hugues doodled on his start list "Go for the Win". On Sunday, he pulled out this piece of paper, reminding me what he had written. A couple of days before the race I had joked around that I would skip a top ten a podium, never believing that it would happen so soon. It was Jim's mom's 85th birthday. It was Hugues anniversary. Kevin was staying at my house in Collingwood with my family to train... On Sunday I incredible things happened and I won a World Cup!
Here are some pictures from the paper at home! 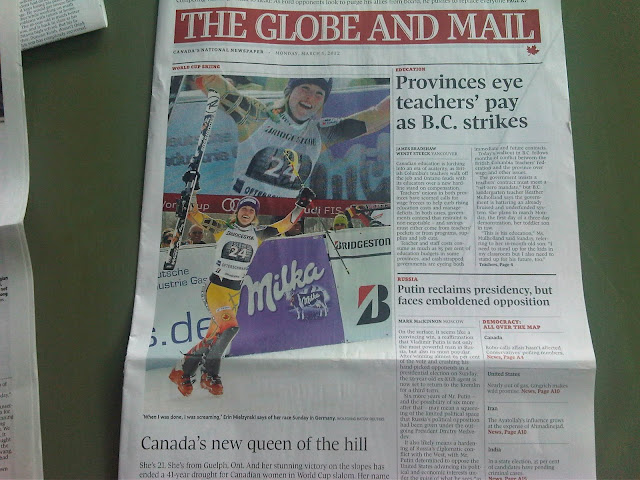 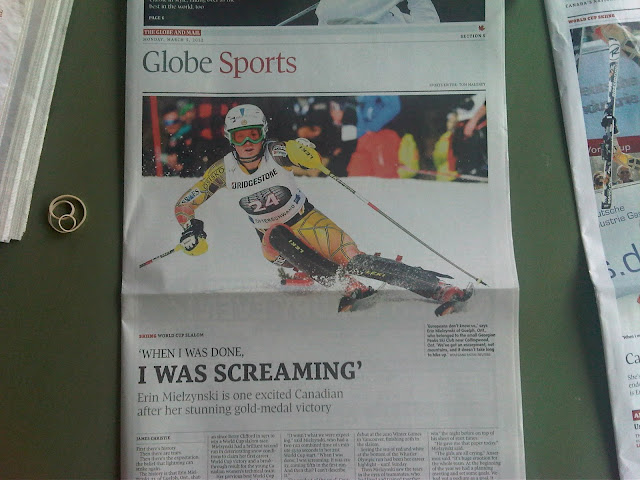 Here is a longer video of the second run including our reactions:
Thank you everyone for everything! You have all been incredibly supportive and loving. You made this day magically beyond belief.