It has been quite a while since I last blogged and it has been SO busy. We had our final World Cup in Spindleruv, Czech. I came into the race 33rd in the World Cup standings, and needed to place about 5th to place in the top 25 and make it to World Cup Finals. I went out of the gate trying to attack and go for it as much as I could. I ended up straddling fairly early in the course, ending my day far too early!

After the race on Saturday, we flew to Vancouver to race in the Nor Am finals on Tuesday. During our travel time my body finally gave into the cold that was going around. I felt horrible when we were flying and couldn't wait until we finally made it to Whistler and could stay in one place for a while.

The girls raced slalom on Tuesday and Wednesday, while the boys raced GS. The next two days we changed disciplines. Most of my immediate family came to Whistler for my Grandpa's 80th birthday and my Grandma's birthday and it was lucky that our races were during this time.

When I arrived in Canada I was able to see the support of the Georgian Peaks Club and their athletes!!
They made me this card for the world champs. It means the world to me that I have so much support back home. It raised the hair on my arms and brings a smile to my face, even when I am not looking at such amazing pictures as these. 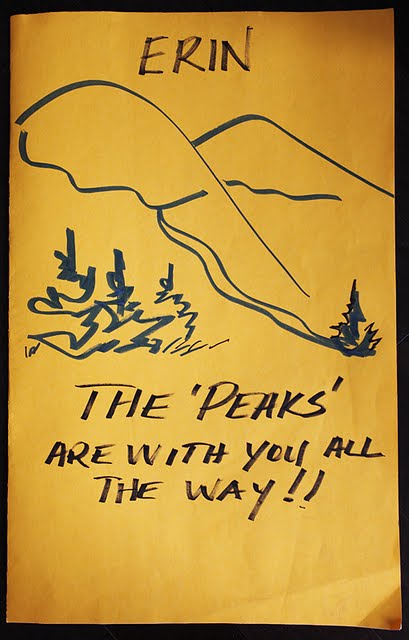 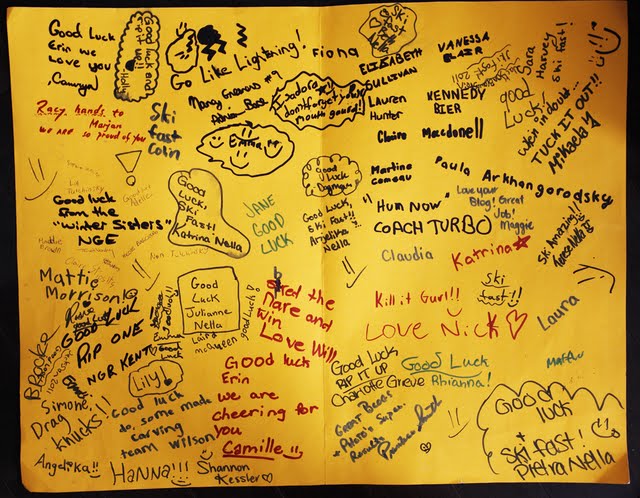 THANKS EVERYONE!!! Hopefully I will see you all soon! 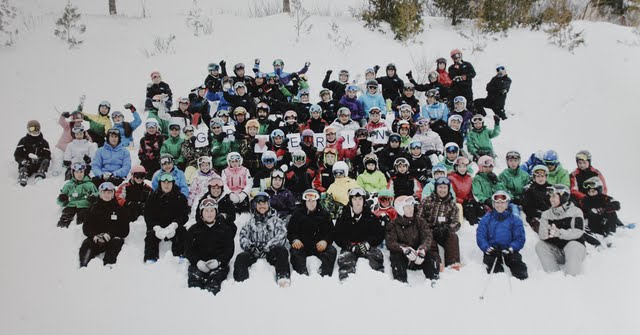 I knew what I wanted to do in the slaloms and I set my mind to doing just that. We went up for the first race day to find typical Whistler conditions... snow! We slipped many times and finally the races were able to run. During the first run I was skiing aggressively, then all of a sudden my pole got stuck between my legs. I pulled it out quickly, it planted in the snow and I punched myself in the face... I must be the weirdest skier there is. I finished the course and came down into 7th 1.4 off the leader. I knew that I had to make up a lot of time during the second run, but it is slalom and anything can happen.... that's why I love slalom. I ended up taking the lead by a little for my first Nor Am victory... ever 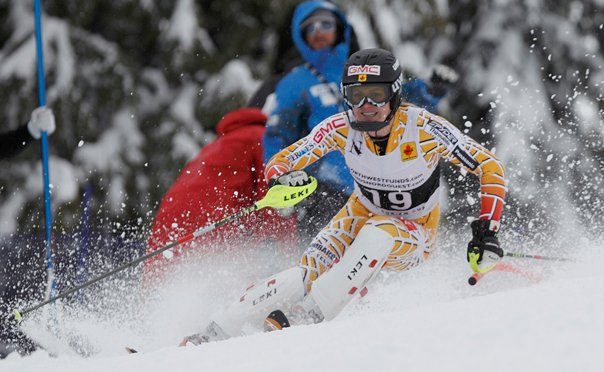 Before the race the next day Tim told me that I had to put absolutely everything I had into the final slalom. I tried to get myself in the mindset to do just that. I put absolutely all my energy, all my concentration, anything and everything I had into those runs, especially my second run. I ended up taking the lead and it is one of the first times I haven't lost the lead from first run to second run. 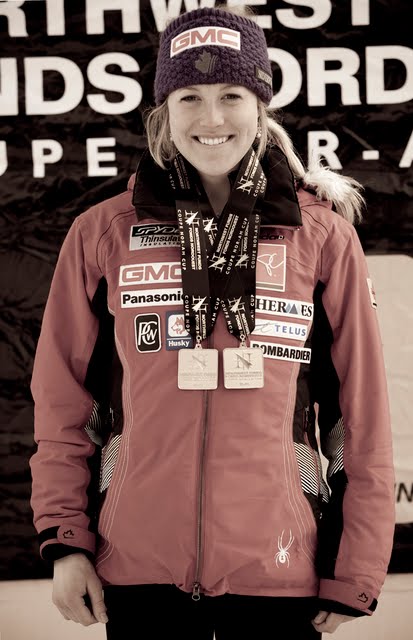 Did I mention that out of six races Maddy Irwin placed, 2nd, 2nd, 3rd, 3rd, with other results in there as well. Yay Maddy! MP won the GS Nor Am title! They have Swag! 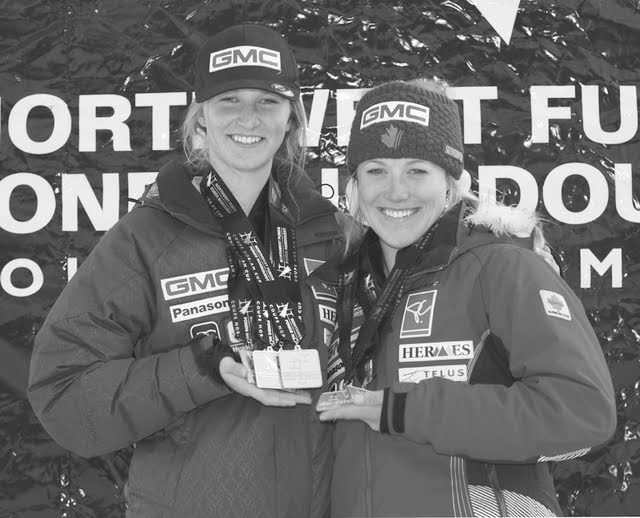 Over on the GS side, Kevin was racing! We were finally able to race on the same day, in the same country, at the same races! However, the conditions were much more difficult for GS, one mistake was very costly. 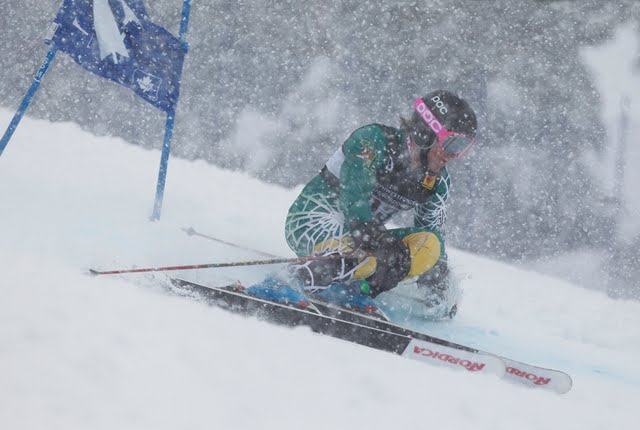 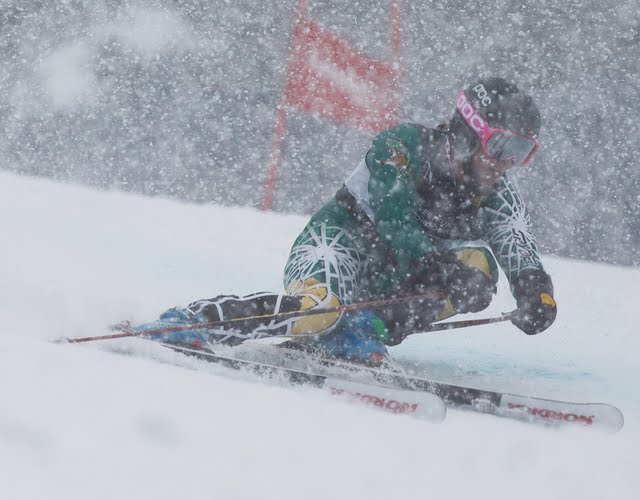 But the second day was a little better. 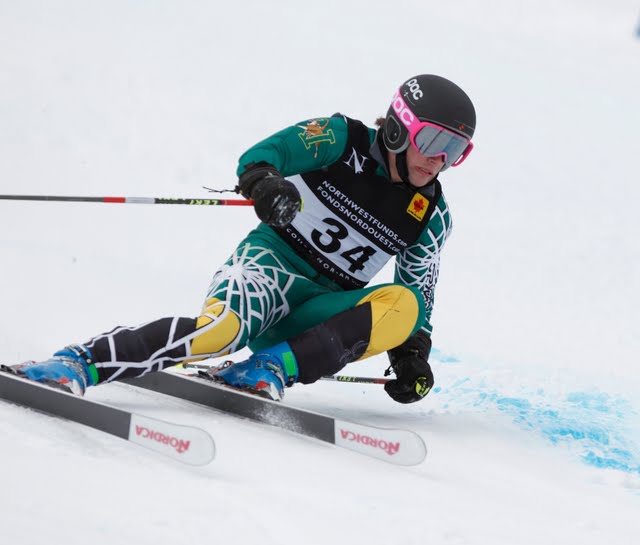 Then I moved on to GS and Kevin moved on to slalom. I packed away my slalom gear and unpacked everything I needed for the GS. I tried not to step on my tails or cross my tips in the inspection with the longer skis on my feet. The GS days were really fun days for me. There was almost no pressure on me and I could just try to push it as much as I could. On the first run I ended up 15th and knew that I needed to make some changes for second run. Kevin took me on a free ski run and told me a few things he has been thinking of, and I went up to the start for my second run. I placed 3rd on the second run, finishing 7th overall. The next day was a bit of a struggle. I felt like my skiing was more solid and I felt in a better position to push it, but I came to the bottom of the course and couldn't see the last, blind gate. I think the outside gate was blended into the fences and the protective barriers blocking the timing.  I didn't want to give it any respect and ended up on the wrong side of the gate. GS- 1 Erin- 0.

Kevin scored an 18 though, so he made up for my lack of skiing. 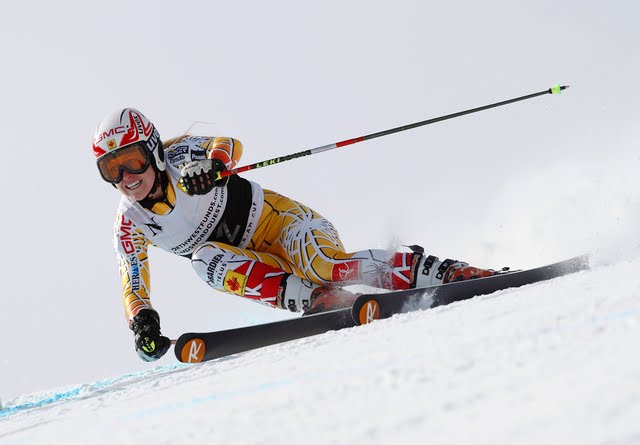 At the awards ceremony, my Grandpa and I posed for a picture with Nancy Green. 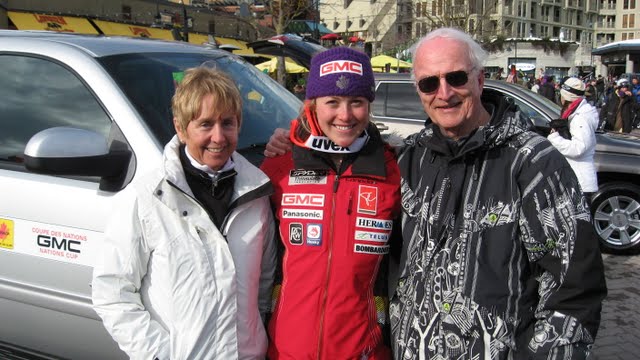 But here is a better picture of him. Which I actually found (again) in the Zoomer magazine in the lounge, which my cousin Carly Bumstead now writes for! 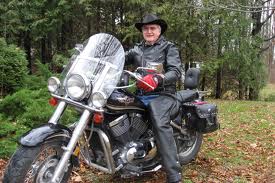 The next two days were Super G races, which I didn't race. I took some time to myself and to get organized after being in Europe for so long. I guess I have to say that getting organized generals means sleeping and relaxing for most of the day. Well.. I organized well. On the second last day we had the NATION'S CUP dual slalom. This means that 4 girls and 4 guys and chosen from both Canada and the USA to race against each other. And guess what... CANADA WON!! We finally were able to race as a team, with no man for himself, and the team was strong! (Or trash talking may have needed some work...) 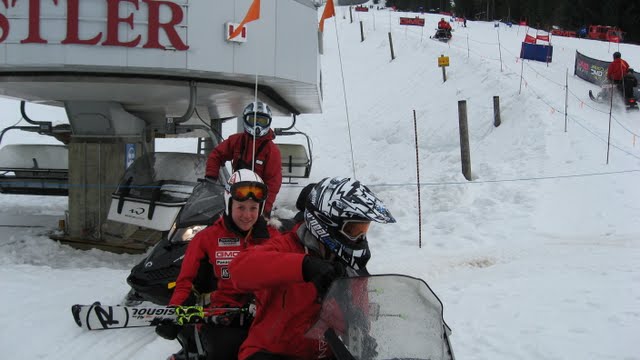 The girls: Me, MP, Britt and Eve 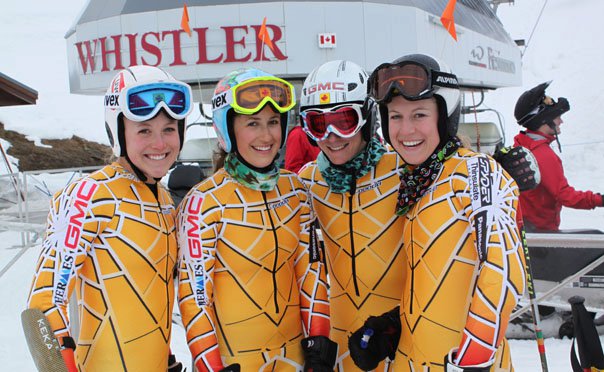 The next day I went up with Kevin's family and friends for First Tracks. We got in line at 7am, ate breakfast at the top of the mountain and skied perfectly groomed hills with no one on them. It was amazing!!
That concluded the Nor Am finals. The conditions were tough, but the competition was tougher. I'd like that thank all of the volunteers out there because they put on some amazing races. Also, my family, the Drury's and everyone staying there made these races extremely enjoyable!

I am in Calgary now waiting for the Nationals to start. The downhill is first... will I or will I not race... That is the question for me right now.
Email Post