On my last blog, I said that my weekend was filled with playing squash, family and... eating. Kevin and I decided to try making mussles and bought a kg at the grocery store for about $6. This is what we created! A salad with ginger dressing, mussles steamed in wine, garlic, tomatoes, fennel, onions and celery, and a beer for Kev! 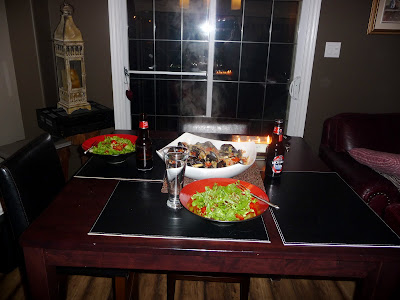 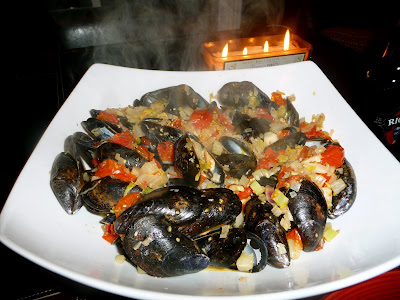 On Monday, I traveled to Levi, Finland. After 3 flights and about 21hrs of traveling I finally made it to Levi, Finland. In the airport I had to google all of the cities I was flying into to make sure I knew where I was going. I flew from Toronto to Copenhagen, DK; from Copenhagen to Helsinki, FN; and then from Helsinki to Kitilla, FN. Then we took a bus to our hotel. When we arrived in Levi, it felt absolutely FREEZING!! The thermometers said that it was -16C (or so), but it felt much colder! We were all raiding our bags for warmer clothes.

Levi is an.. interesting place. I have NEVER been so far north. Apparently the sun rises at about 10am and sets at about 2pm, but I have yet to see the sun. When the sun is up, it is completely overcast and dark. They always have lights on the hill and I ski with clear lenses. When we walked to dryland at 3pm... this is what we saw. (The flash does make everything look a bit darker though.) 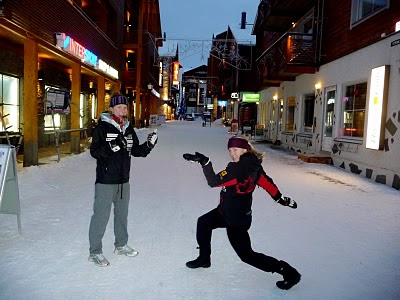 I used my litebook in the morning to try to make it seem like I had been in the sun before training. 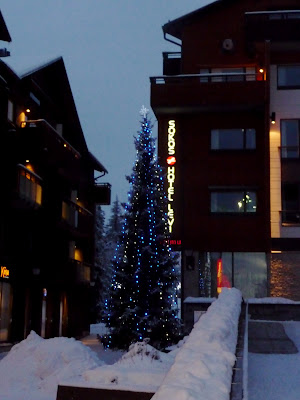 Looking from the top of the training hill, you can see the snow covering every part of the landscape; the trees, the river, the ground. But there are no mountains. This is the highest point I can see around and it is probably shorter than the length of Georgian Peaks and much flatter than Rogers! 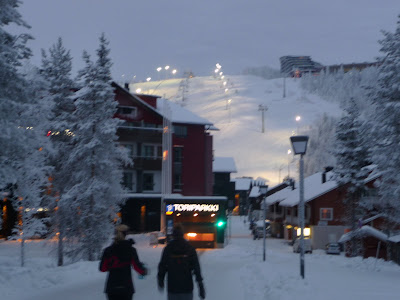 The trees are covered in snow... so are the material parts of our helmets surrounding our faces after a day of training. 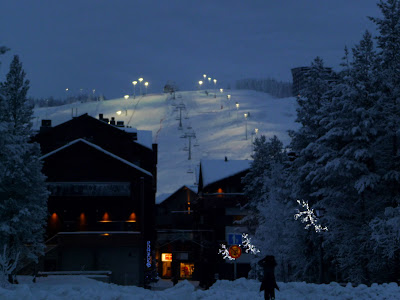 Our training hill with the lights.

After skiing, we do our usual dryland and then challenge the American team to a game of volleyball! I was in the sidelines today because I upset a muscle in my glute playing squash on Saturday... apparently I get too competitive and intense. 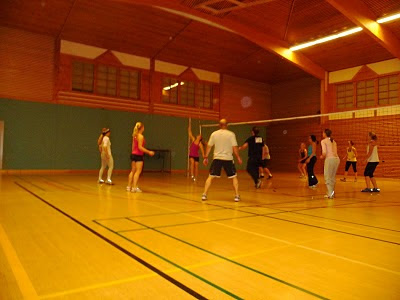 Anna trying Mark's move of tapping the ball over the net standing backwards. 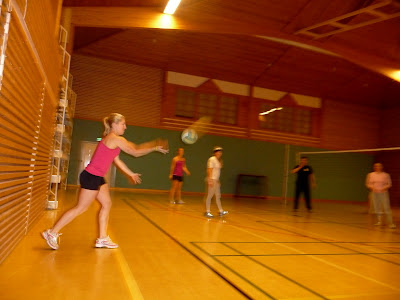 Eve is defiantly the most consistent server on the team! POWER!

Tomorrow we train and then free ski the race hill! It will be the first time I see the race hill! If the snow is anything like the training hill, it is going to be very icy!
(Hopefully I will learn a better setting on my camera and have better pictures then!)
Email Post