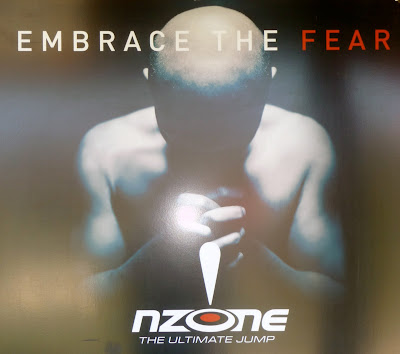 When I was little, when asked what the super power I most wanted was I answered, "Flying". Well, I was able to do that a couple of days ago, sort of. Well... I was able to jump out of a plane and then fall for 60 seconds. Before I went some of the guys explained it to me this way, "It is like looking out of your Lufthansa flight... and then jumping." 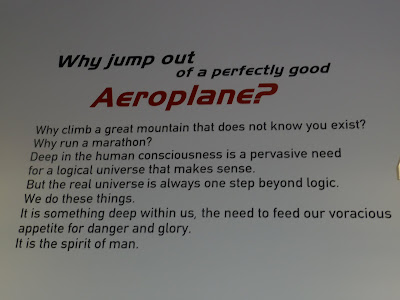 At first I was hesitant to go. It is... a lot of money and my mom was frowning on the idea (she doesn't usually frown on crazy things). I let the opportunity slip by me twice before I got a simple email from my Dad saying, "I talked to Mom, she said yes. I'll pay. Don't miss the opportunity". Thanks Dad and Mom! So I talked to some of the teams here and learned that the Prospect Team guys were going to go on our next day off. The night before the day off, I told Phil Brown that I was going to try to meet them there. I called the next morning, but they said they were on hold (because of the clouds) and had no more room, they were in fact overbooked. I decided to head over to Queenstown anyway and see if I could slip into their group. When I got there Phil told me that he had called before me that morning and I was the "overbooked" person. I GOT TO GO! 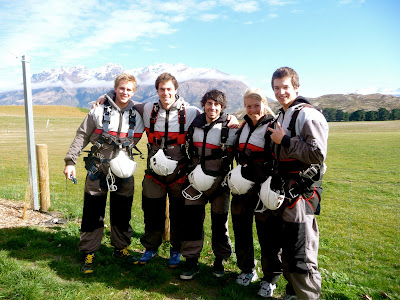 Phil, Sasha, Dom, Me and Erik!
So I signed my life away and we headed to the van that takes us to the launching area. As soon as we arrived we saw the plane that we would be taking up... not a very big plane with a big see through door on the side. 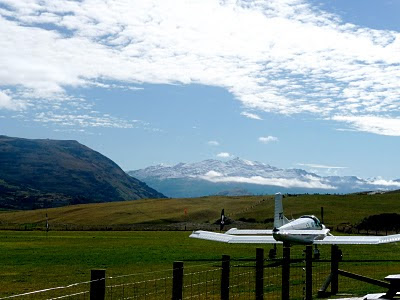 We got suited up in our jumpsuits, harnesses, helmets (less like a helmet, more like a hat), goggles and gloves. We had a 5 minute briefing on what to do, that was mostly along the lines of... Be a banana and look up at the camera (this type of briefing would NEVER happen in North America). Then I met my jumping partner and we headed to the plane with Phil and Sasha. On the way he asked me how high we were jumping from today, I answered, "15 000ft. Might as well go big or go home." And... big, or high I should say, it was. 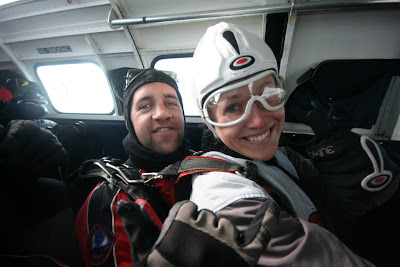 We kept going up and uP and UP! And when I thought we must almost be at our maximum height, I was told we were just over halfway to our jumping height. What had I gotten myself into? 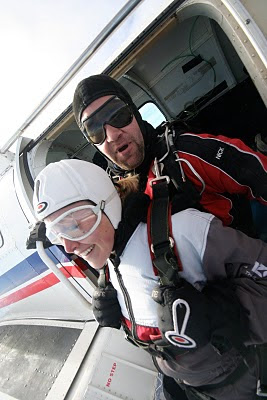 Finally, the green light in the plane went on, they threw open the door and Sasha's camera man climbed to the side of the plane. Then Sasha's guide hung him off the side of the plane, they rocked back and forth three times in time with the camera man... and they were GONE. And this is a new sense of the word gone. They fell at around 200-240km/h from the plane.... That is when the rigamortis set in... finally I was nervous. 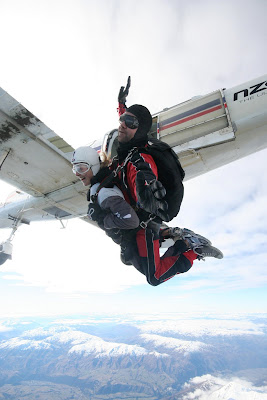 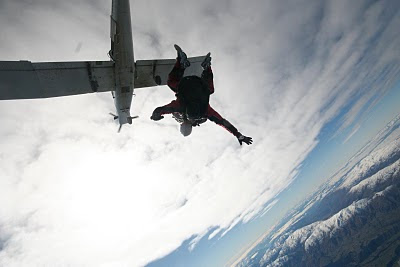 I screamed... as if I was being murdered and then everything slowed down for a while. He tapped my shoulders and I let my arms fly. 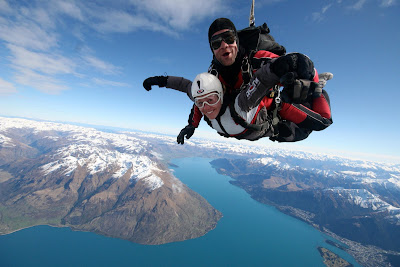 It was amazing. It doesn't even feel like your falling, everything slows down for a while and the 60s of free fall feels like much longer. However, it was really hard to breath. I was more afraid of not catching my next breath than I was of falling. My eyes were watering so much my goggles filled up with tears. 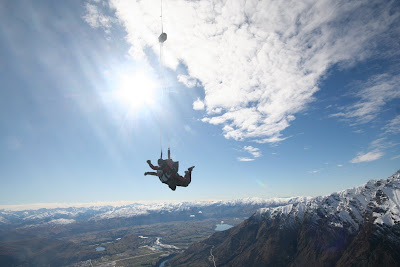 I kept looking all around me, at my camera man spinning and circling and at the "small" peaks below, thinking about how crazy it was that I was in the air. 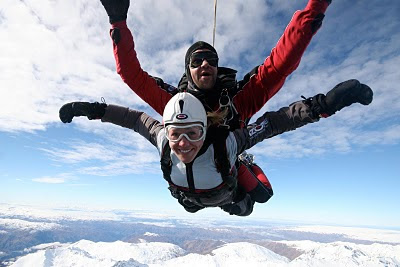 Finally, my guide pulled the parachute and everything suddenly went completely silent and peaceful, our clothes stopped whipping around, my eyes stopped watering, I could breath again. After I few seconds I hear, "Do you want to fly?" At this point, I am not thinking straight... fly? But as he pulled on the cords to the parachute, I understood. 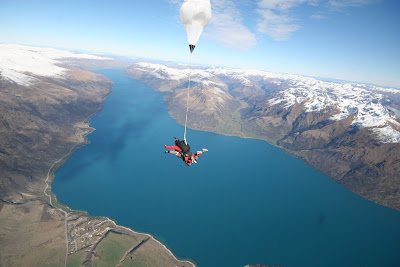 He was letting me steer us in the air. If I pulled down really hard with my right hand we would go into a spiral dive. I started getting really dizzy and I heard his voice behind me telling me to just pull with my left hand when I wanted to stop. I kept spinning for a while longer, then pulled with my left hand and suddenly we were weightless, it was as if we got lifted up for a second.
Eventually, he took the cords back and began steering us towards the landing field. All I had to do was lift my legs up when he landed and as his feet touched and he started jogging a bit, I put my feet back down and jogged with him... and that was it. 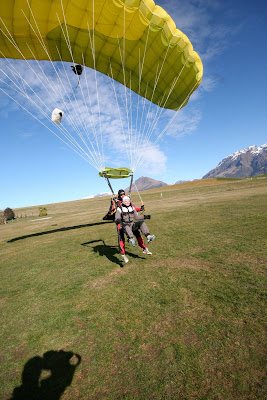 The entire experience was amazing... or at least what I remember of it is. Phil picked up my pictures for me and saw them before I did. His comment was that I had the exact same facial expression in every picture.... He was right. I had the biggest smile on my face in every one. 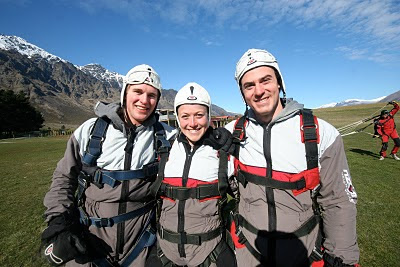 I called my Dad after and left a message. I talked to my Mom on a very... distant Skype connection. Our conversation went something like this:
Me: Guess what I did today??
Mom: Can you hear me? Oh... what?
Me: Jumped out of a plane
Mom: What happened with a plane?
Me: I JUMPED OUT OF IT!

...And I won't forget it.
Grandpa, does this still sound like what you want for your 80th birthday gift?
Email Post