Last time I blogged I was in Saas Fee, Switzerland. We had an amazing camp battling many different types of weather. After Saas Fee, I headed to Vermont for some time off. I felt great for the first few days, however I think my body disliked the fatigue, jet setting and working out. I got a little bit sick and spent a few days fighting a fall cold.
However, my time in Burlington was relaxing and restful. I experienced the beautiful colours and as always, it was hard to leave! 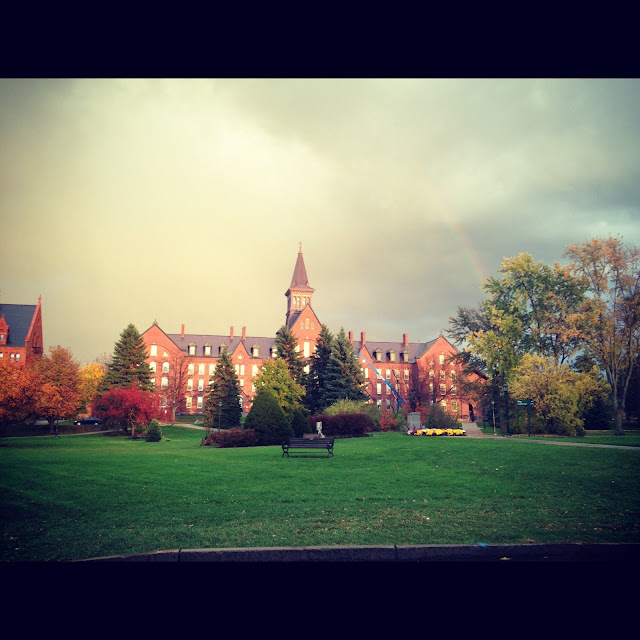 However, I was excited to get back on snow and finally conquer Pitztal! Pitztal is a glacier in Austria, and year after year we head here to attempt to conquer the steep pitch and difficult terrain. 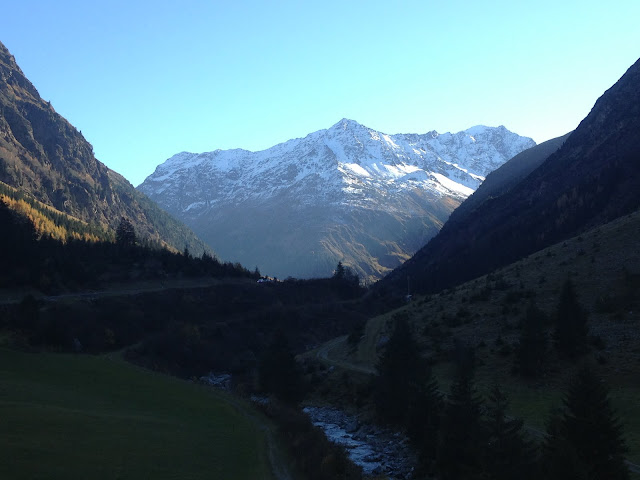 This year I felt much more comfortable than usual, however I still have a lot of work to do! (MP and I are wearing our new suits!) 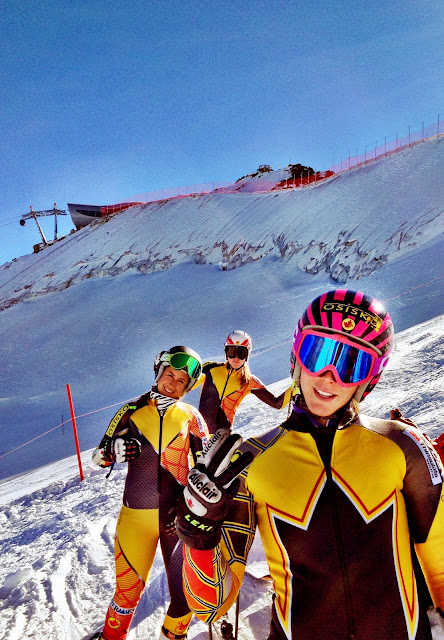 After a few difficult days of training in Pitztal, we headed to Solden, Austria for our first race of the season.  I'd say that for women, Solden is one of the most difficult GS races of the season! It is steep and at a high altitude. 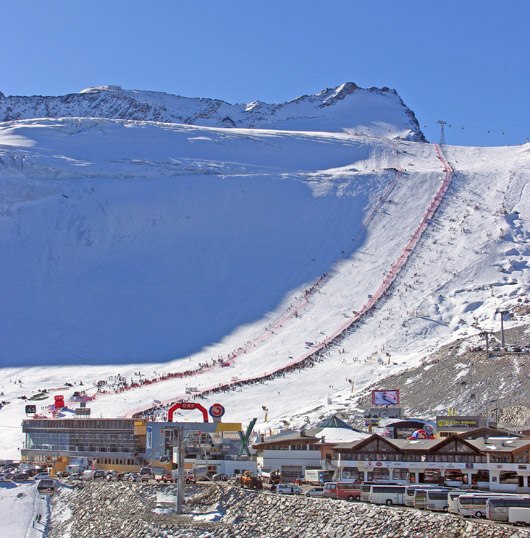 Pretty in Pink in our new jackets... 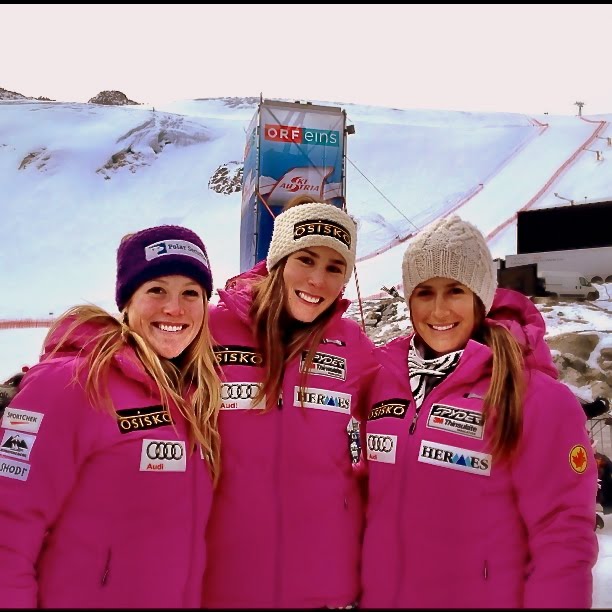 However, we were ready to become fire breathing dragons on race day! 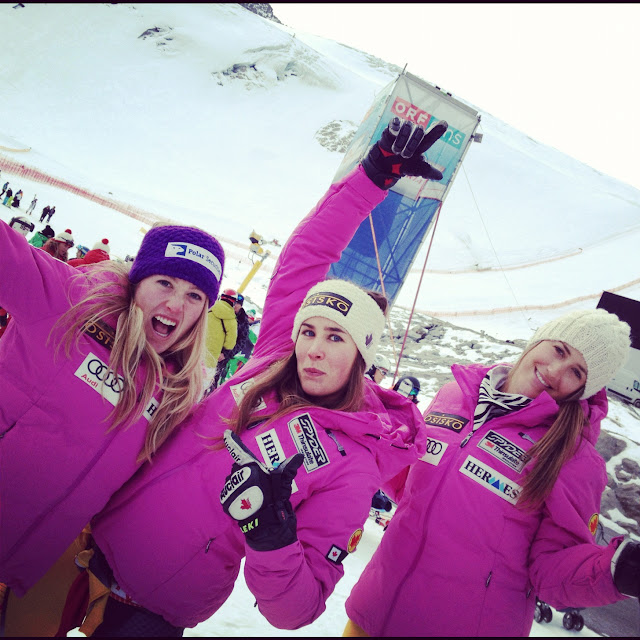 The weather the day before the race was quite good. We were able to free ski the race hill, and the snow was amazing after they injected! 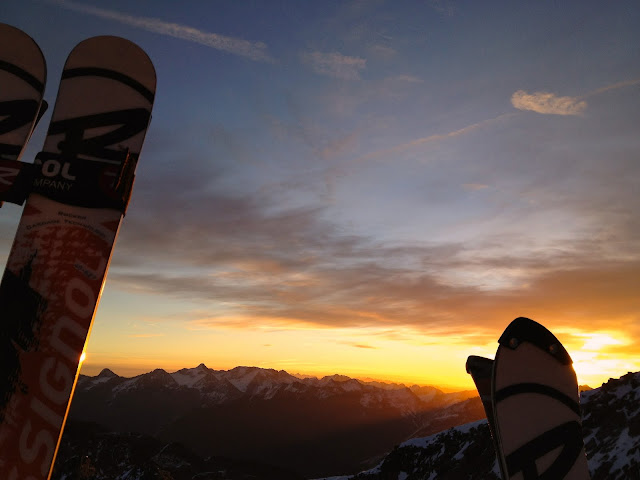 We were able to train a few more runs in gates on the "Ice Box" on Solden. 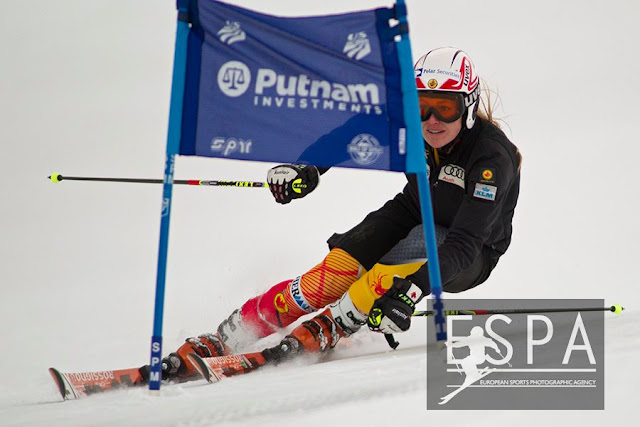 We also practiced our dual slalom starts, which are much like skier cross starts. You have to hold onto handles and pull yourself out of the start when the gate drops. We will have a couple of dual slalom races this year, that I hope to be a part of. Yet, I hope we can beg the skier cross team to give us some tips before the races! 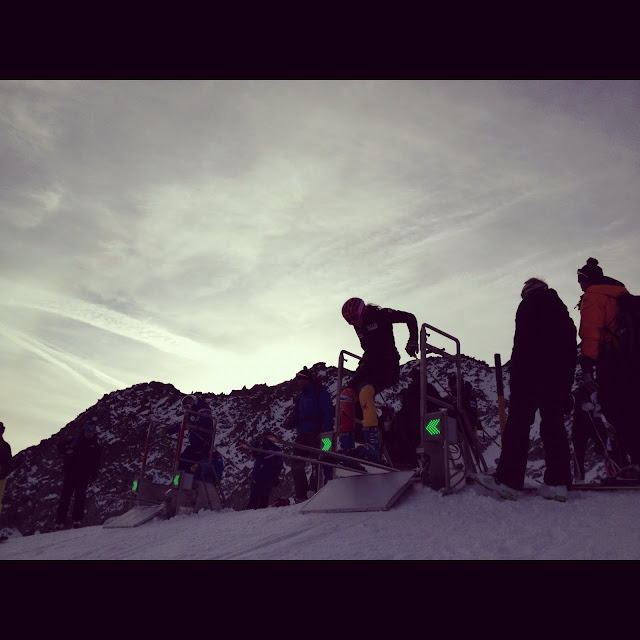 Then it was time to prepare for the race. While we did our activation dryland, Jay helped us, Marco tuned our skis and our other Rossi servicemen made sure that we were taken care of. 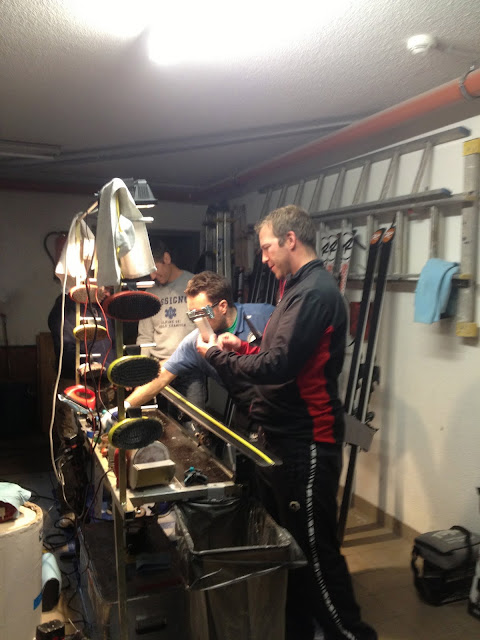 On the day of the race, the weather turned nasty. However, we had trained many days like this, so we knew what we were in for. Mitch started 24, MP started 31 and I started 59. Before first run the fog lifted and we were able to start the season! 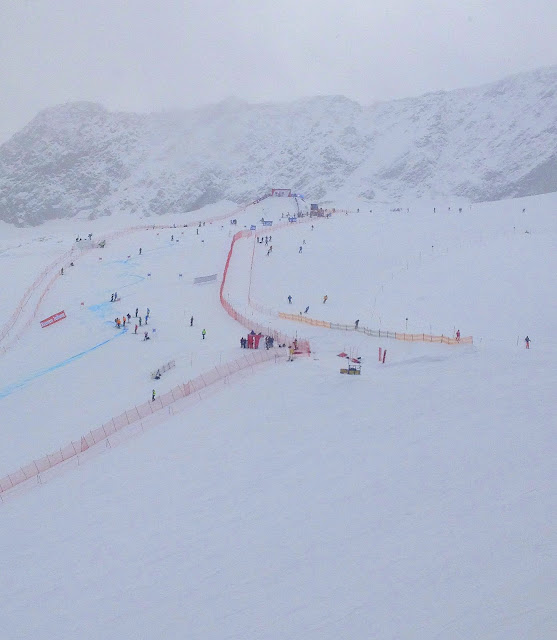 After first run, Mitch placed 9th, MP placed 20th, and I did not qualify for second run. I was very disappointed with the way I approached the course and the way I skied. It was difficult for me to implement the new changes that I have made over the summer, in my GS skiing, in a difficult race situation. I have many things to address and work on, however I learned from this day and I am hungry to improve.
However, a few months ago, I decided to go to Solden to get the cobwebs out of my system before Levi. Yesterday, I was able to experience an intense race situation, high pressure, tough visibility and a bigger crowd. I did what I came here to do, and I have to let everything else go (even though I'm usually hard on myself). 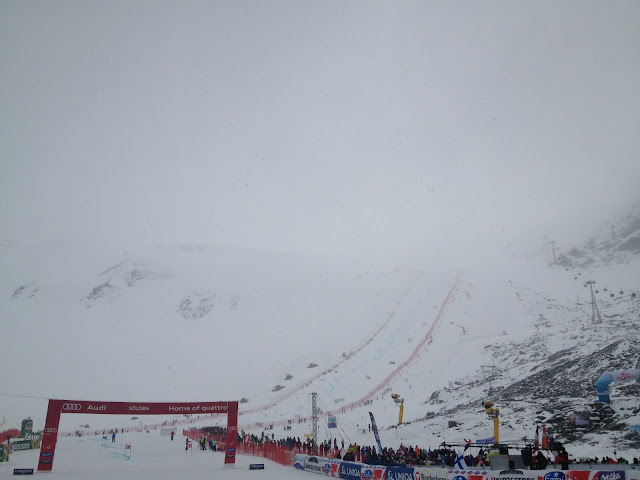 However, I was able to inspect again and watch the second run. The fog came back in and it was a tough run. This is what the visibility looked like for MP. 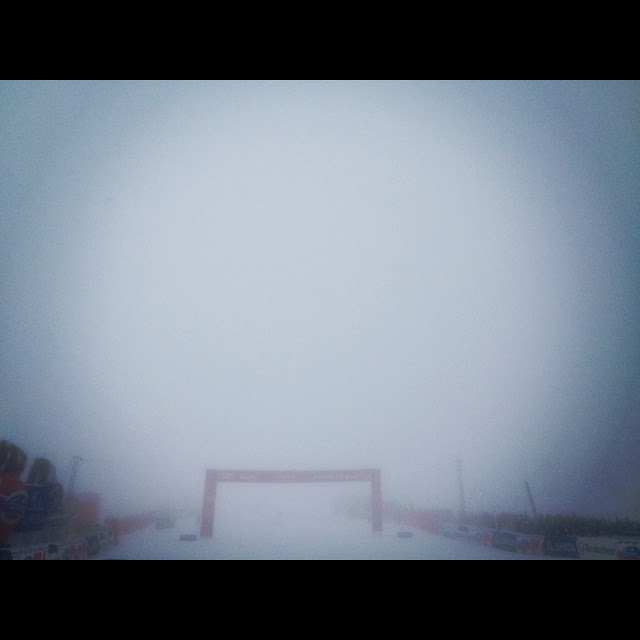 However, MP and Mitch were dragons; fighting through mistakes and going for it in bad visibility! In the first race of the season, MP placed 19th and Mitch placed 6th! We all knew that they were ready, and they proved us right! 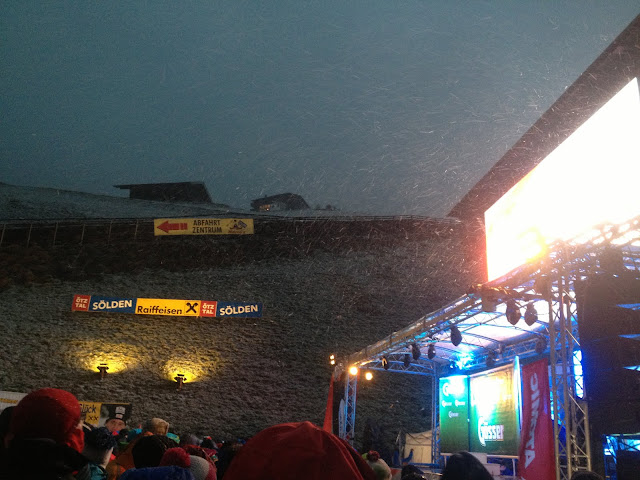 Thus, we were able to go to our first awards ceremony of the season and watch Mitch dance onto the stage! 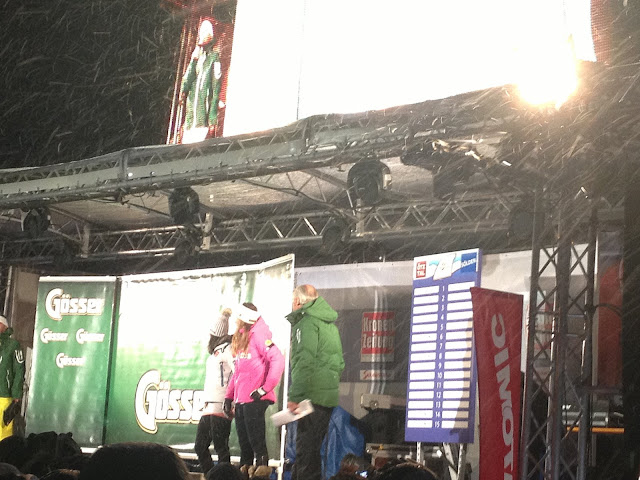 Soon we will bring out our slalom skis and start preparing for Levi! I'm excited to arc some shorter terns again.
What do you think of the new Uvex slalom set up? (I am missing a bar and my Polar Securities sticker!) 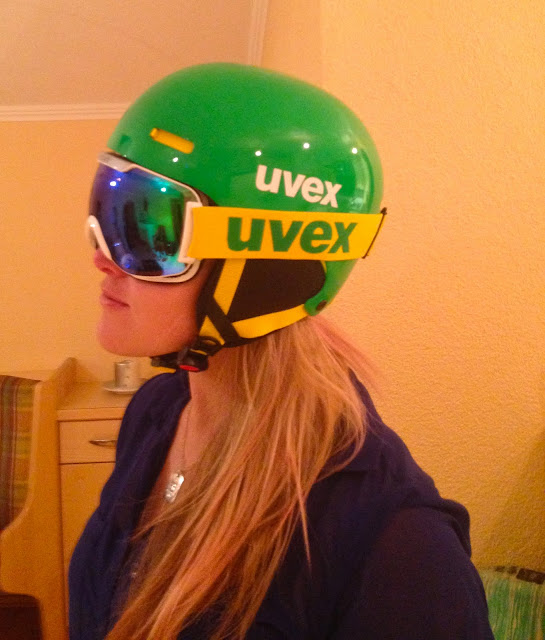 Until next time. I will leave you with these pictures! 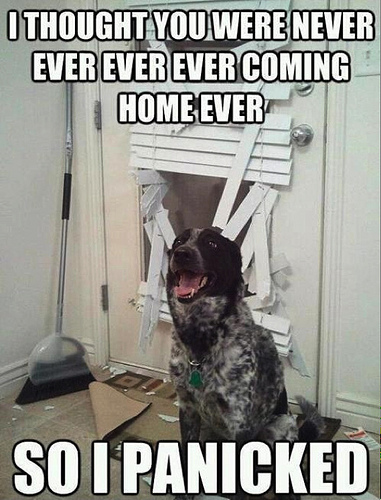