New Zealand (Minus a Camera)

To start with, I will say that I am now in Calgary/Canmore for a training camp. I arrived back from New Zealand and had a few vacation days at home. I came out west again for a dryland training camp and testing. I would have blogged earlier, but I have had to finish many hours of Rosetta Stone so that I get my deposit back! Oops.

I have quite a few pictures left from New Zealand, but I forgot my small camera at home that has most of the pictures on it. So I will make due with these (and a few from Anna!) 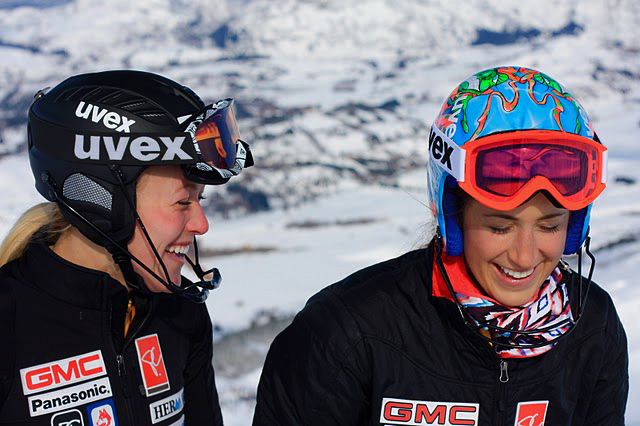 Our time at Coronet Peak was incredible! We had some amazing training, dryland, food, views, and so much more. 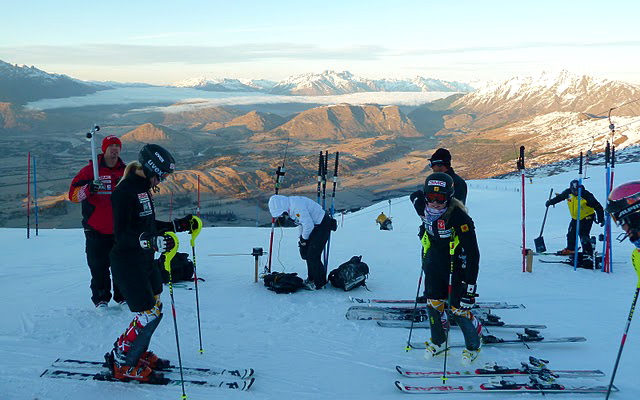 Most days, we would leave for the hill at 6:50am, quickly put on our boots and head to the lift. Usually it was still a bit dark. We would get in as many runs as we could and then leave the hill just as the sun was hitting our course.
And everyday, we had this to look at at the top of our courses. 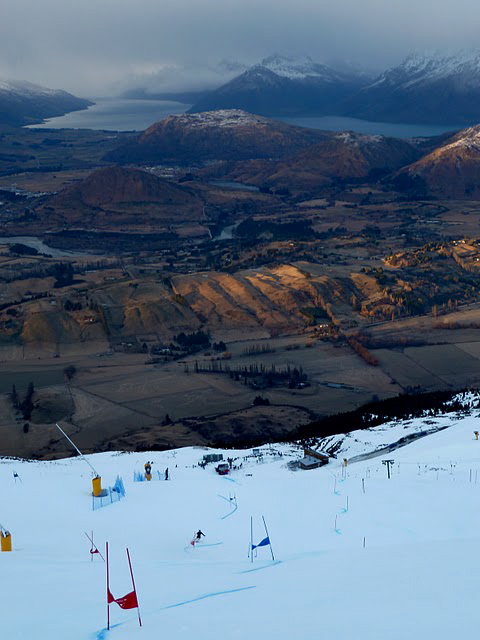 After a few days of training, we had a day off, so I headed to Wanaka to visit Kevin where he was staying. Wanaka is gorgeous. The lakes there are breathtaking as well.
Kevin and I decided to walk along the rocky beach. (I forgot I had this picture, but it seems to perfectly depict us walking....)

The sun was shining. 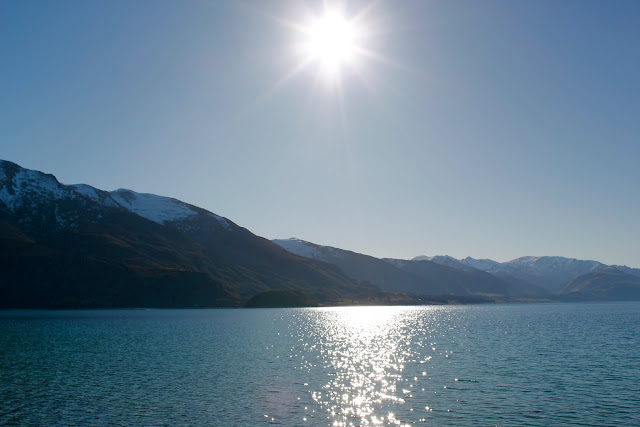 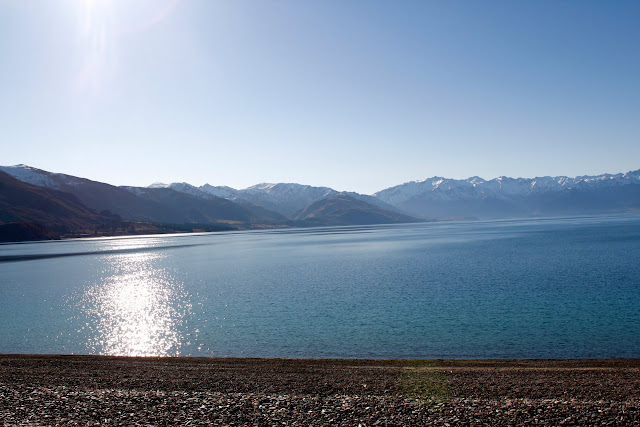 We decided to ruin the perfect water... 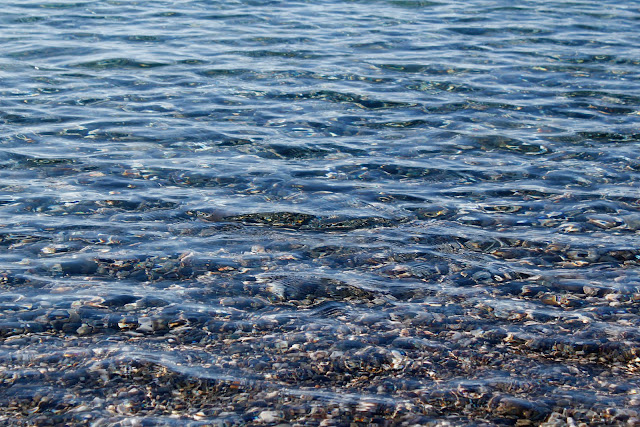 and skip some rocks! 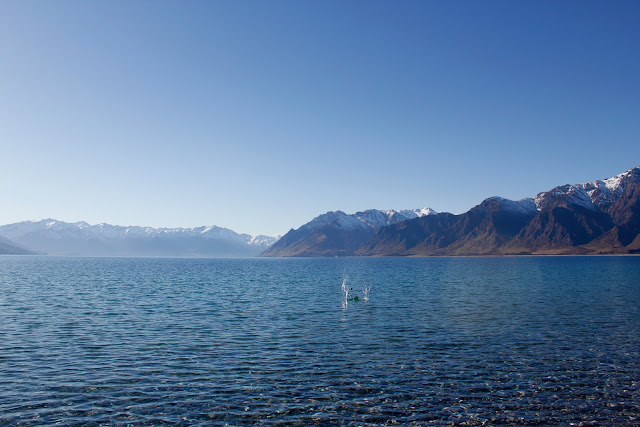 But apparently I lost any of the rock skipping abilities I had as a child.

We could have walked forever! 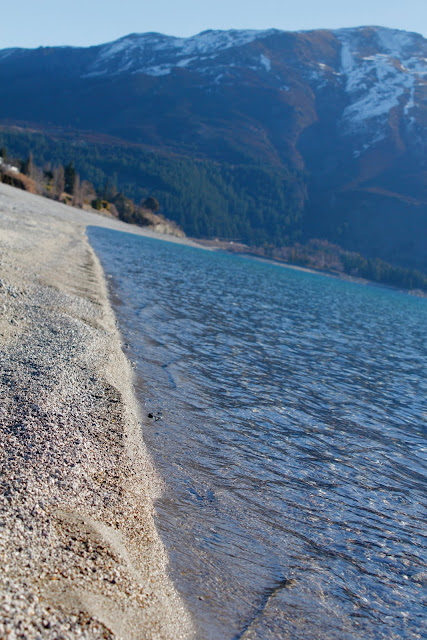 Soon it was time to leave Kevin and get back to work! After a couple days of training we heard some bad news... a storm was about to hit us; nicknamed "The Storm of the Century". We decided to train hard for one more day and try to beat the storm. At the top of every run I would tell Jenny about something warm because she was standing in the cold wind all morning! Warm chocolate croissants right out of the oven, clothing straight from the dryer! Just as we finished up our 10 runs of GS, the storm started to roll in. 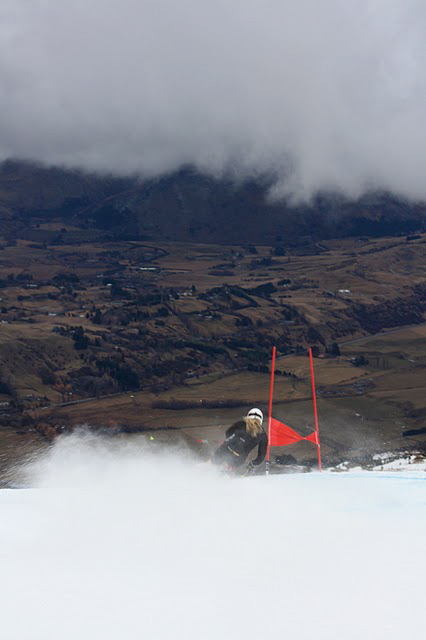 Then we waited.... And thus ends the story of the warm, green New Zealand. Although it didn't get as cold as they expected (there was an animal warning for the famers!), it still got much colder! It seemed to just keep snowing! In a place that I was jogging with shorts and a t-shirt, we now had to use chains and drive on road for the golf-carts.
Kevin and I decided to tough out the weather and go out for Indian food in Queenstown. The 20minute drive took us an hour each way! Cars and buses were in the ditch. People were putting on chains. It seemed like no one knew what to do with the snow! However, we, as Canadians, knew what needed to be done. A game of speedball in the snow! Or.... packing snow around the US team's door... 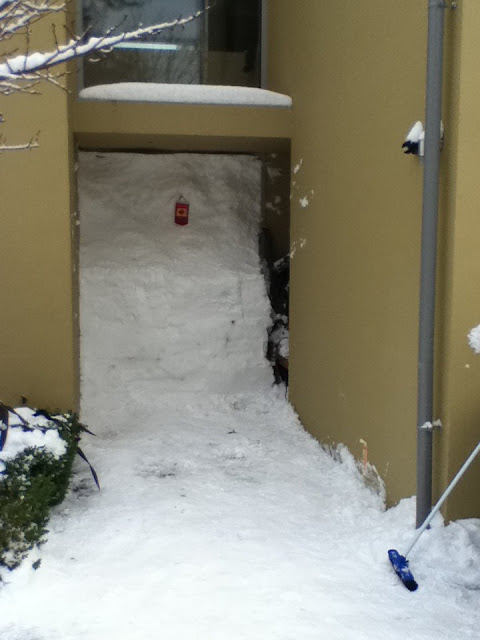 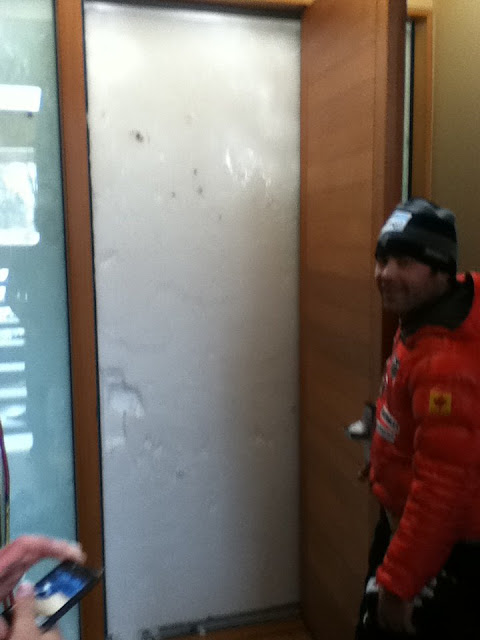 Don't worry, they got the guys back by putting a duck in the bathroom.
All in all, my camp in New Zealand was amazing, as usual. I learned a lot, set new goals, accomplished other goals and I am ready to get back on snow in a few weeks!!
For now.... dryland training. I have to stay focused on the task at hand here.

I uploaded these videos from my first World Cup race in Aspen in 2009 to fill the gaps where my other pictures should have been.
This is my first run, the first time I ever made a second run!


Here I am warming up for the second run!


I will blog again soon! I even have the pictures ready this time!