Eastern US of Eh

1) Lost Camera= Zero Pictures
2) I am not so great at this blogging thing
3) Orford-
After Closing ceremonies, I went home for about a week to relax, work out and see my friends! Kevin came at the end of my time at home and drove me to Quebec for 3 days of training in Orford. Every day we trained two events, while the sun shone brightly on us. It was amazing. Every day, skiing was incredible and so much fun!! Finally, my GS started feeling... better!
4) Burke-
From Orford we travelled to Burke for the speed portion of the Nor Am finals. The first day we got there, we free skied the hill. The first run I can honestly say I skied like a little girl. After that it was much better, and it felt good being in the air again.
The next day was the girls super g and the guys super combined. We raced our super g after the guys. However, there was a bit of troubles during the race. The forerunners went down the first course and FLEW overt he rolls. They decided to delay the start and move a few of the gates out to slow the speeds down. The forerunners were sent again and still went huge, so they reset the course. That day I think I ran after 3:30, however I can complain because the guys had to race the slalom after that. My run was technically pretty good, but I was a little nervous coming into that super g without much training. I was excited to try again the next day.
However, it rained all night and the snow didn't freeze as well. The guys course was reset again because there was a tree stump in the middle of two gates, right on the line. While the girls warmed up, the guys started their race. About 10 guys finished and they cancelled the race due to soft snow. The jury met to decide what to do for the girls race and eventually decided to cancel also. There was a bib draw though!! And I actually won a pair of poles!! Good day at the office... sort of
5) Waterville-
Kevin and I headed to Waterville after our failed attempts at speed comebacks. The first day was a day off for the girls. I went up to free ski because it was such a wonderful day!! We didn't even wear downhill suits, which is big news for us. Yet, once we got to the hill we heard that we were going to do some gates. I guess we should have learned two years ago when Tim said, "Always come prepared." The day was amazing, but the gates were not so nice to us.
The next day was the GS! I was really excited to race. Warm up was great and the day was amazing yet again. My run felt better than any race run this year, and I think my interval time was better too. I didn't make it to the end though. Towards the bottom, I fell and hit my chin on the salted snow.... Aka I looked (and still look) really good. A goatee on a girl is really attractive right? I thought so. My day ended very early, so I went back to the hotel and relaxed in the sun, before coming back and training some slalom. 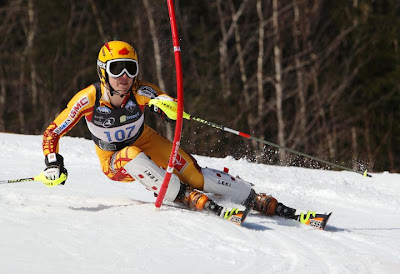 SLALOM! I love slalom. GS too, but the next day was slalom. I took myself and my really attractive chin to the hill to race some slalom. The guys ran first, so that the snow wasn't too soft for them. First run felt pretty good. I didn't have to think about much, but what I usually do in training. I made a bit of a mistake at the bottom, but ended up with a good start number for second run. Second run was a bit all over the place; I stuck my pole between my legs, my contact was trying to escape, my ski was really attracted to the gate, but between that, my run was pretty good. I ended up tied for 4th (which was good enough to place second in the overall Nor Am Slalom title behind Eve.... meaning I get my own World Cup spot in the slaloms next year- no more time trials for slalom (maybe))
After the race, Eve, Elli and I hastily decided to go to the US Nationals instead of doing the speed at our Nationals....
On the Road Again
Email Post