It has been a long time since I’ve sat down and written, especially for my blog. I made excuse after excuse- blogs were a fad, I don’t have anything relevant to say, I am too busy. But now, times are changing, and I am sitting down to write about it.

First of all, I want to say that writing about the current times is a touchy subject, to say the least. There are many different points of view, experiences, rules and even research. If you know me, you know that I try to avoid touchy subjects. I am a highly sensitive person, I care deeply about all living things, and I try to hurt the feelings of no one. Secondly, I know that people are experiencing these unprecedented times in extremely different ways. Some are having trouble financially, some have lost loved ones, some are not overly worried, some live each day in fear, others are still stuck at home. Everyone is coming from a different place, and I hope that this time is showing us how to meet people exactly as they are, respect their beliefs and find compassion. I know that I live a privileged life as an alpine skier. I know that having the fantastic team of Alpine Canada behind me is a blessing. And I know that in the grand scheme of things sports and alpine skiing are small fish in a huge ocean. 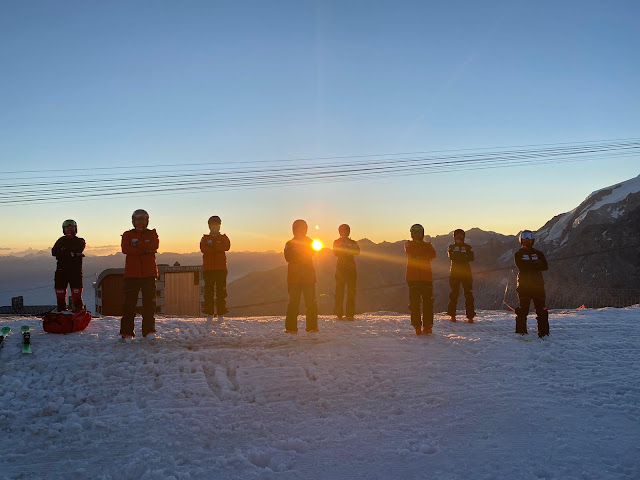 Thus, this brings me to my reason for finally sitting down and writing again. I know that young athletes follow me, or their parents do. I know that many coaches in Ontario and Canada are preparing to take their athletes overseas to train. Many of these athletes, coaches and parents feel comfortable with this decision, while others are extremely hesitant. I am hopeful that by sharing my experiences here, I can let you know what our protocols and situations are as we begin travelling. I urge you to make sure that you are comfortable before travelling, you do your research, you ask all of the questions that you have, and you come up with a decision for yourself. I am not here to advise you, and sometimes I won’t share all of the personal details, but I am hopeful that I can give you a snapshot into the world of skiing at the moment.

I am a “germ girl” in normal conditions. I have never been big on sharing drinking glasses, I wipe down the stationary bikes before use, I try not to touch my face (my eyes are my downfall), I open the bathroom door with a paper towel (or another contactless method) and I like having my own room when a roommate is sick. The current times have really heightened these tendencies as we all have to think two steps ahead about what we are touching, who we are near and what could make us sick. 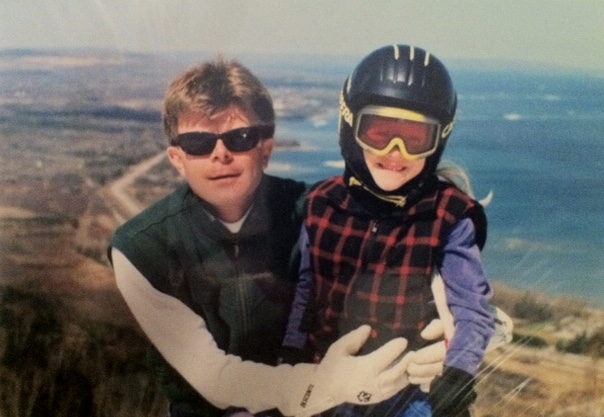 My Dad and I at the top of Georgian Peaks.

To delve into this further, this “germ girl” way of life began when I was 6 when my dad got pneumococcal disease (streptococcus pneumoniae). The doctors were unable to diagnose him and he became sicker and sicker as his lungs filled with fluid and started to collapse. We couldn’t move him to another hospital because he was too sick, a priest was called to give my dad his last rights, and he was simply laying in what we thought would be his death bed. We weren’t allowed to visit because he was scared that we would get sick too. To make a long story short, my dad underwent major surgery slitting a 1.5ft opening in his back to remove a rib and cutting 4 more openings to insert tubes to drain the fluid. Simply put, when I was 6, I almost lost my dad to an extremely rare form of pneumonia... so nowadays I am scared. 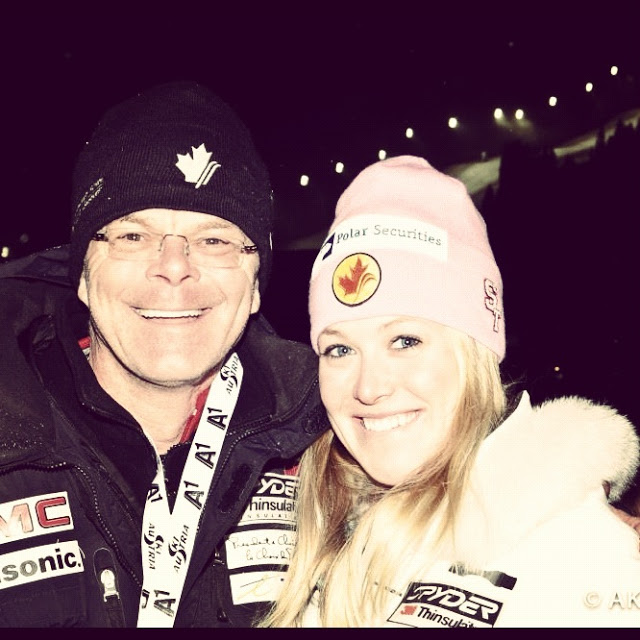 When our season ended early and we flew home just after COVID 19 was announced as a pandemic, I was scared. I was scared for my family, I was scared of all of the unknowns, and I watched the news with anxiety each day. I followed the rules, stayed home, wore masks, washed my hands for 20 seconds (twice)... you all know the drill now. I woke up each morning in disbelief, feeling anxious and ill prepared. Meanwhile, I was training hard throughout the summer, knowing that at some point I would have to leave Canada and my family.  With each passing week, my departure loomed ever nearer. We tried to plan a ski camp in Canada, but one by one those options were taken off of the table for various reasons. Eventually, the date was set. We would leave Canada to travel to Switzerland and onwards to Italy on July 25th. Each day I counted down to this date, knowing that I could always pull the plug and that Alpine Canada supported this decision entirely. I asked numerous questions to far too many people, as I felt comfort in gathering information. My greatest fears being contracting the virus in a foreign country and passing it to others. I tackled the tasks that were put forth by ACA, while silently dreading July 25th. We sent our passports to the Swiss consulate to get new visas for Schengen travel, we listened to zoom calls about COVID safety while away, we jumped on additional zoom calls with our specific teams to come up with plans, I talked things through with my sports psych and finally 5 days out from departure I headed into town for what would be the first of many COVID assessment tests

I walked into the testing center with a mask and gloves. I waited outside until someone came and got me. She opened the door for me and we stood in between two entrance doors. She was in full PPE including face shield and a clothing cover. I took off my gloves, and she sprayed my hands with disinfectant. I then took off my mask and threw it away. She sprayed my hands again and gave me a new mask to put on. She sprayed my hands again and opened the internal door. Once inside I walked up to a woman behind many sheets of protective plastic. She took my information and when a tester was ready he came and got me. He was very very kind. We went through some paper work and he explained how the test would feel. I was nervous because I heard that it is extremely painful. He said that it will feel like a lot of water going up my nose, such as when you jump into a lake too aggressively. I would feel the need to sneeze, but I wouldn’t. Finally he took out a fairly long stick with a little brush at the end, tipped back my head and guided the long brush deep inside my nose and started spinning the stick. The feeling was exactly as he had explained. It wasn’t painful, but it was extremely uncomfortable. My test came back negative. I printed the result along with many other supporting travel documents.

I started packing for my trip. One bag was entirely extra food (in case I felt unsafe eating), sanitization products, protective products (masks, gloves, hand soap etc), etc. I packed far too much for a 3 week trip, but I want to be prepared to zig while everyone else is zagging and I foresee many changes to our schedule this winter. My hope is that I get to see my friends and loved ones at some point this season.

On July 25th, we drove to the airport with everyone in the car wearing masks. 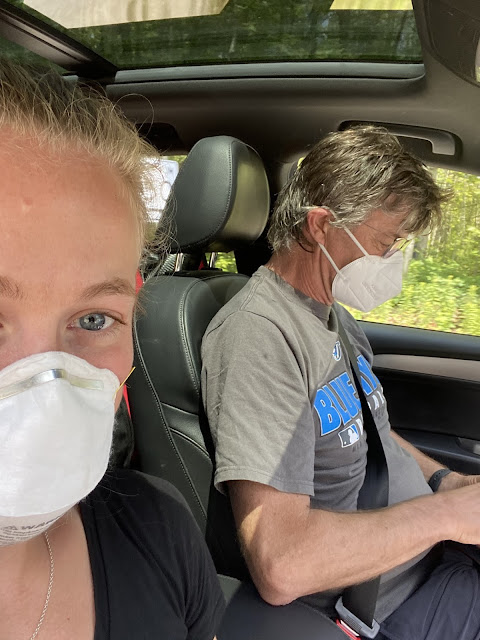 Dad and I driving to the airport

Most of the doors at the airport are now closed, so all traffic has to go in one set of doors and you can only enter if you are flying that day. The airport was a shell of the place it had once been. The line ups were small and there were no sad goodbyes at security. I checked in my bags, and headed to security. At the Toronto airport, only one security is now open for Canadian and European destinations. A man checked my temperature with a contactless thermometer. There were very few people at security, many lanes open and they shut down some lanes to practice social distancing. At the international terminal there were only two flights flying out; one to Zurich and one to Frankfurt. There was only one place to get food and water. I bought some water, but I had packed my own food from home. 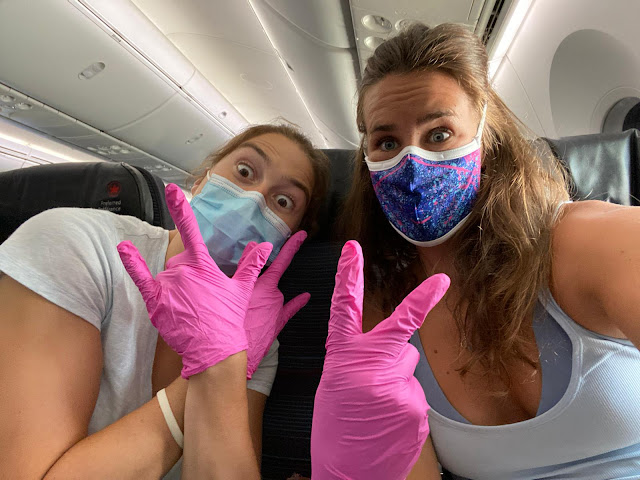 I was a little bit late, but I didn’t want to take off my mask for long during the flight, so I headed to a secluded place in the terminal, took off my mask and ate as quickly as possible. I waited to board the flight until the very end, so that there were less people on the ramp leading into the plane. The plane was only half full, however the flight attendant told me that the same flight a week earlier only had 12 people on it. My seat was fairly secluded, so I was happy about that. Gone are the days of a “dinner like” meal service followed by drinks. They now offer a panini and a few snacks in a plastic container and plastic water bottles. The plane was much more subdued than usual, with fewer people getting up to walk around and few people getting up to use the toilet. The flight was uneventful, but it was ironic when they ask you to social distance while disembarking and then make you get into a bus that does not allow for social distancing. 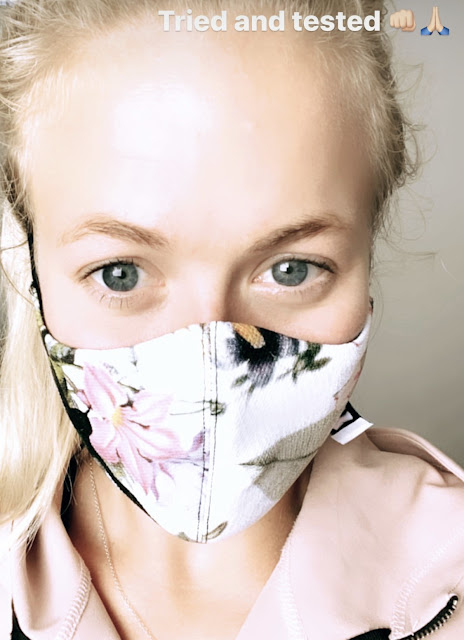